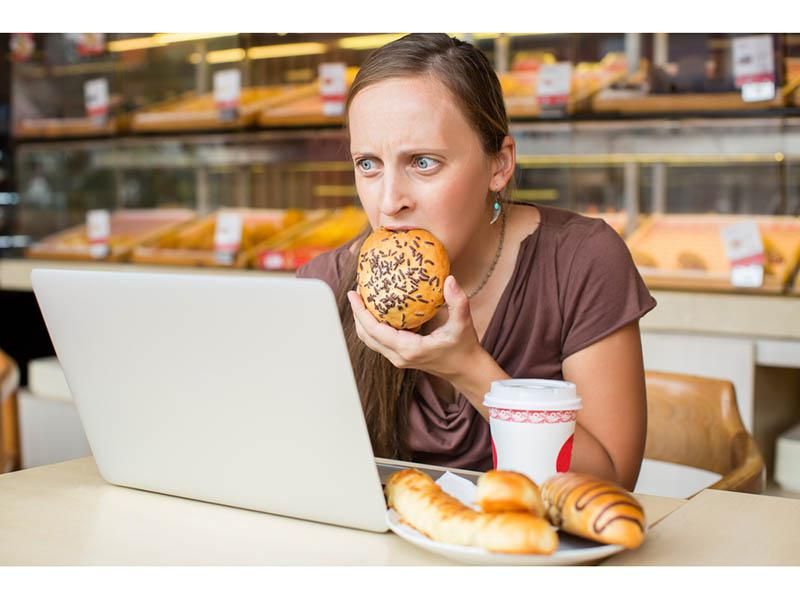 Ding Dongs and Doritos have never solved anyone’s problems, but that doesn’t keep us from seeking solace in food. When work gets hectic, when plans fall apart, when relationships founder, we often try to calm our minds by filling our stomachs.

Everyone has their own comfort food. A bag of chips, a big plate of macaroni and cheese, or a carton of mocha fudge ripple ice cream can all make a person feel better, at least temporarily.

Food therapy has an obvious downside: While it may be comforting, it’s also fattening. Everybody knows that obesity rates have been climbing steadily over the decades and that we live in stressful times. Is it possible that we’re simply trying to eat our way to happiness? Could stress be making us fat?

In recent years, scientists have uncovered surprising connections between stress, appetite, and weight gain. Simply stated, the chemicals that we produce during stressful times can help determine what we eat and how we store fat in our bodies.

Despite what some late-night commercials claim, this new understanding has not led to any magic-bullet treatments for weight loss; you can’t slim down simply by taking a pill that supposedly blocks stress hormones.

But recent research does help drive home a point that many psychologists and weight-loss specialists have been making for years: Managing stress can be a crucial first step toward slimming down.

When we feel stressed out, our bodies resort to chemical warfare. Looming deadlines, traffic jams, or arguments turn on an alarm in the brain that triggers the release of stress hormones. As a key part of our defense, the adrenal gland starts releasing large amounts of the hormone cortisol, a chemical that helps prime the body’s “fight or flight” response.

Cortisol gets a lot of attention in both medical journals and the press, and for good reason. For one thing, it seems to play a major role in all sorts of stress-related health problems, including heart disease and weakened immune systems.

It also helps control the buildup of fat, a process of deep interest to just about everyone. In times of stress, cortisol can collect fat from the blood and other storage places in the body and move it to the belly. Cortisol can also increase the size of individual fat cells. For some people, waist size may be an outward sign of stress. A study published in Psychosomatic Medicine found that women with mostly abdominal obesity tended to produce especially large amounts of cortisol when faced with a difficult task.

Cortisol isn’t the only hormone released during stress, and it’s certainly far from the only hormone that controls appetite. For these reasons, it’s overly simplistic to say that cortisol alone causes weight gain. Likewise, she says, it’s unrealistic to think that so-called cortisol-blocking supplements could aid in weight loss — and that’s assuming such products can even reduce cortisol levels in the first place.

Still, there’s little doubt that cortisol affects food choices. Studies in both animals and humans suggest that the hormone may help stoke an appetite for high-energy foods loaded with fat, sugar, or both. As reported in an issue of the Proceedings of the National Academy of Sciences, rats that have their adrenal glands removed suddenly lose all interest in sugary drinks, but will still happily eat their rat chow. (Interestingly, they no longer want to run in their wheels, either.) When injected with the rat equivalent of cortisol, they suddenly develop a taste for things like sugar and lard — at the expense of their regular food.

The same study found that sweets and fats can quiet the stress alarm in a rat’s brain. The flood of stress hormones slows down, and the rat suddenly acts less annoyed. If it could talk, the rat would probably say it feels calm — the same feeling that humans often find at the bottom of an ice cream carton.

It’s often hard to translate findings from animals to humans. Still, a few studies suggest that cortisol can encourage people to overeat, too. For example, a study published in Psychoneuroendocrinology found that women who produced large amounts of cortisol during stressful situations also consumed more calories afterward.

As reported in the Annals of the New York Academy of Sciences, subjects who were prone to eating binges tended to have higher levels of cortisol both when they woke up in the morning and after they completed a physically stressful task.

Researchers have found that stress may be especially dangerous — and especially fattening — for anyone with binge-eating disorder, a condition that causes people to periodically go on eating sprees that are beyond their control. As Gluck and colleagues noted in the Annals of the New York Academy of Sciences, roughly 30 percent of people who seek medical treatment for weight loss have the disorder. The researchers point to stress as a key trigger of the disorder’s onset. However, binge eaters aren’t the only ones who overindulge when times get tough. While binge eaters feel like they lose control over food, other people may make a conscious decision to go for that extra brownie or slice of pizza, perhaps with the idea that a stuffed stomach will take their minds off their troubles.

Whatever a person’s basic approach to eating, lingering stress can scuttle any efforts to lose weight. In the words of a report from the American Psychological Association, “Weight loss is never successful if you remain burdened by stress and other negative feelings. If you’re facing twin battles against stress and weight, calming your mind should be your first priority.

Laurel Mellin, a clinical psychologist at the University of California at San Francisco Medical School, has designed a weight-loss program that addresses this issue. To drive down the urge to overeat, she says, people must first find the tools to nurture themselves and to set limits. Among other things, she recommends simply asking yourself two basic questions at least five times a day “How do I feel? What do I need?” Besides learning how to detect and deal with often buried feelings and needs, she suggests 30 to 90 minutes of exercise a day to help relieve stress and find balance.

Of course, there’s no one-size-fits-all remedy for stress. Some people find relief through physical activity, relaxation exercises, yoga, or meditation. Others need to see a psychologist who can help them adjust their outlook on life and their approach to food. Still others may need to make lifestyle changes, perhaps including more long walks and fewer late nights at the office.

The American Psychological Association does offer a few other tips for people trying to lose weight:

Ice cream and chips can make a person feel better, but the feeling won’t last. In the end, staying healthy is the ultimate victory over stress.

University of California at San Francisco. Tackling obesity: Exploring the intersection between body and mind.

Spirituality and Health. The Solution, by Laurel Mellin.