Smoking and the Heart 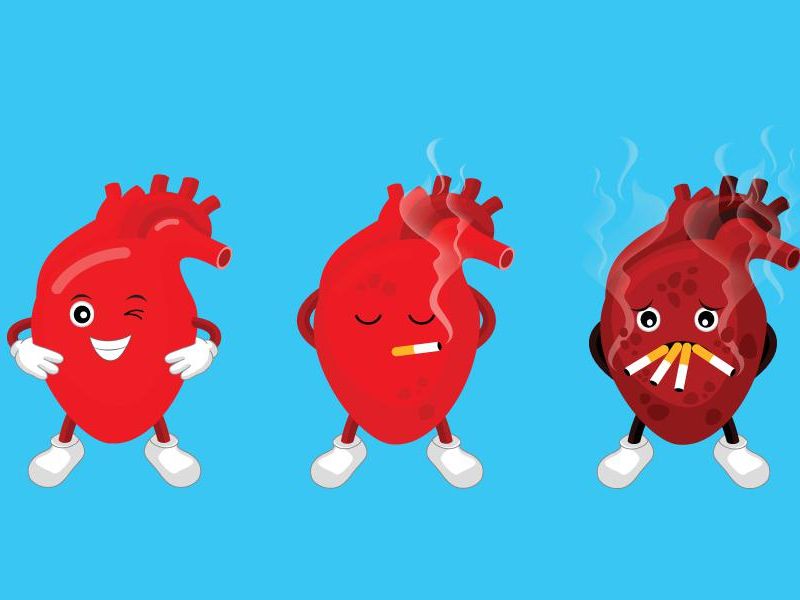 Everyone knows cigarettes can kill. By the time you reach middle age, you’ve probably known a smoker who has died or is dying of lung cancer. But lung cancer and emphysema are not the only threats from smoking — another big risk is heart disease.

Each year, in the United States alone, cigarettes are responsible for up to a third of all deaths from heart disease, according to the American Heart Association. Smoking increases your risk of cardiovascular disease two to four-fold. Your risk goes up with the number of cigarettes you smoke, starting with as few as four cigarettes a day. Chronic exposure to secondhand smoke (that is, smoke from other people’s cigarettes) also raises your risk of heart and cardiovascular disease.

If you’ve lit up a few cigarettes in your time, just reading these numbers may make your chest tighten. But don’t despair: The road to a heart attack has an exit ramp. If you quit smoking for good, you can dramatically lower your risk for heart disease in a very short time. And if you already have heart trouble, kicking the addiction may be the key to recovery.

How does smoking affect the heart?

Smoking allows a fast and very efficient way to rapidly deliver nicotine into the bloodstream. And cigarettes are popular for a reason: The nicotine in cigarette smoke sets off a rush of adrenalin, providing a pleasant shot of energy. But while you’re enjoying a lift, your heart may be suffering. Adrenalin speeds up your heart rate and makes your arteries squeeze tight. Your blood pressure may rise slightly, putting extra strain on your heart. In addition, carbon monoxide inhaled through smoking robs the body of needed oxygen, since the red cells are quicker to pounce on that poisonous gas and bind to it than they are to incorporate oxygen.

Still worse, the chemicals in tobacco smoke accelerate the development of atherosclerosis, a disease of large and medium-sized arteries. In this disease, damage to the blood vessels makes them less able to “relax.” Smoking contributes to this by stiffening the artery walls, which can cause plaque to rupture and trigger the formation of a clot that can clog an artery. Smoking also hastens the breakdown, or oxidation, or certain fats or lipids (LDL or “bad” cholesterol in particular). This process increases blood clotting as well as the presence of inflammatory substances in the blood.

All of these events can then injure or have a toxic effect on the lining of the blood vessels. The arteries may become inflamed, and the damage to the inner lining of the arteries makes it easier for cholesterol and other fats to “stick” to the vessels. As a result, fatty deposits called plaque can start piling up in the arteries, causing them to harden. To compound the problem, cigarettes also lower the levels of HDL or “good” cholesterol, which helps clear artery-clogging LDL (“bad”) cholesterol from the blood.

Many smokers, in fact, are on a shortcut to a heart attack. If plaque starts clogging the arteries that feed the heart — a condition known as coronary heart disease — the organ can become starved for oxygen. This can cause severe chest pain (angina). If an artery becomes completely clogged, part of the heart will shut down. Doctors call this a myocardial infarction, but it’s better known as a heart attack.

Is secondhand smoke dangerous to the heart?

Yes. Sitting in a smoke-filled room isn’t nearly as hazardous as lighting up a cigarette, but there’s strong evidence that secondhand smoke can damage both your heart and circulatory system. One U.S. Surgeon General’s report on secondhand smoke notes that exposure to it increases the risk for nonsmokers of heart disease by 25 to 30 percent and lung cancer by 20 to 30 percent. The report concludes that there is no risk-free level of exposure.

Isn’t smoking on the decline?

In states such as California, which have laws banning smoking in the workplace and restaurants, cigarette use has indeed gone down. But overall, more than 15 percent of adult Americans smoke and it remains the leading cause of preventable death in the United States. For young people, the problem is that many associate smoking with being adult, emancipated, and glamorous; teenage girls, in particular, may smoke in an effort to stay thin. Studies show that although smoking cigarettes has declined slightly among high schoolers since 2011, more are now smoking e-cigarettes and hookahs.

Programs to control smoking do offer hope, however. A study by researchers at the University of California at San Francisco found that over an eight year period California had 33,000 fewer deaths from heart disease than expected — a gain they attributed to the decline in cigarette smoking resulting from the state’s tough tobacco control program. In addition, those Californians who continue to smoke are smoking less.

Is it too late to quit?

No matter how long you’ve smoked, or how much, now is a great time to quit. Soon after you give up smoking, your heart will relax, and your blood will become thinner and much less likely to clot. The inner lining of your arteries will begin to heal, greatly slowing down the buildup of plaque.

All of this is great news for your heart. Unlike the lungs — which maintain an increased risk of lung cancer up to 10 years after you quit smoking — your heart is more forgiving. Within two or three years after you stop smoking, your risk for a heart attack will be the same as that of a person who never smoked. Quitting smoking alone cuts the risk of heart attack by nearly 65 percent over a 3-year period, with half of the benefits occurring in 3-6 months. If you’ve already had a heart attack, giving up cigarettes will cut the odds of another attack in half.

In contrast, switching to low-nicotine brands does not appear to reduce the risk of heart attack.

How can I quit smoking?

Breaking the grip of nicotine isn’t easy. Mark a day on your calendar when you’ll quit for good. Tell family and friends that you’ll need their support. When it’s time to quit, you may want to try a nicotine patch or gum to help calm your cravings. (Check with your physician first to make sure the patch is safe for you.) Your doctor may suggest the prescription drugs bupropion (Zyban) or varenicline (Chantix) to help you quit. However, the Food and Drug Administration warns that these drugs may cause mood changes, depression, or even suicidal tendencies in some people — so be sure to thoroughly discuss this option with your doctor first, and if you decide to take these medications, immediately report any changes in your mood or behavior to your doctor.

Current Smoking Among Adults in the United States. Centers for Disease Control and Prevention.

Heart disease and smoking: Why you need to quit. American Academy of Family Physicians. http://familydoctor.org/handouts/289.html

US Department of Health and Human Services. The Health Consequences of Involuntary Exposure to Tobacco Smoke: A Report of the Surgeon General. http://www.surgeongeneral.gov/library/secondhandsm…

Food and Drug Administration. Worsening Depression and Suicidality in Patients Being Treated With Antidepressant.http://www.fda.gov/cder/drug/antidepressants/Antid….