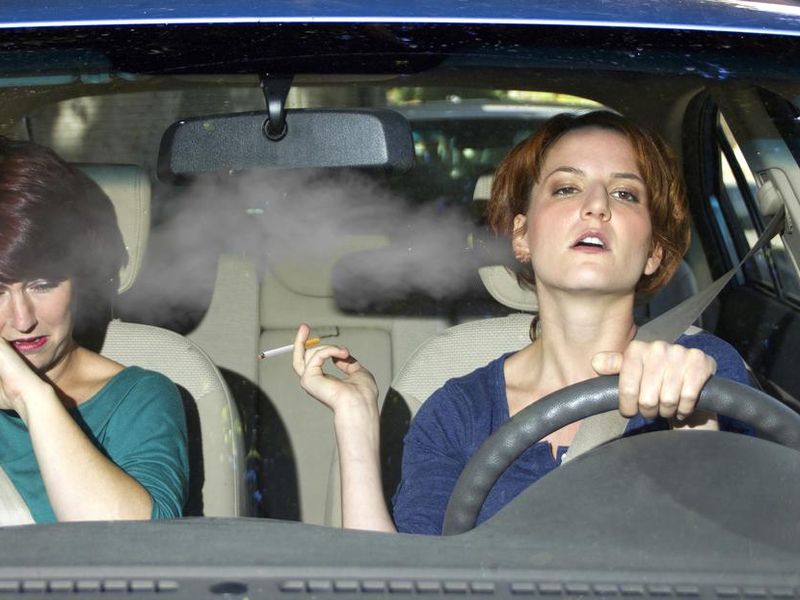 Most cigarette smokers know the dangers of tobacco. After all, the Surgeon General stamps a warning right on the pack. But what about the people sitting next to the smoker? What about his friends and coworkers? His children? Secondhand smoke doesn’t come with a warning label. If it did, more smokers might try harder to kick their addiction.

According to the best current estimates, secondhand smoke kills up to 73,000 adult Americans every year, making it the third leading cause of preventable deaths in the country. (Not surprisingly, firsthand smoke leads the list.) Most of the deaths are from heart disease — more than 69,600 a year — but lung cancer also takes a major toll, killing another 3,400. Secondhand smoke can also aggravate allergies, trigger asthma attacks and migraines, and increase vulnerability to colds and other respiratory infections, according to the Mayo Clinic.

Secondhand smoke isn’t quite as toxic as firsthand smoke, but that’s small comfort. It still contains over 4,000 chemicals that have no business in your body, including carbon monoxide, a gas often used in suicides, and 40 cancer-causing agents, including benzopyrene, a potent cancer-inducing chemical. Interestingly, internal documents from Brown and Williamson show that tobacco companies knew about these dangerous compounds as early as 1975 — years before public health experts recognized the hazards of secondhand smoke.

Citing the fact that secondhand smoke increases the risk of heart disease and lung cancer by about 30 percent, the U.S. Surgeon General’s Office issued a report in 2006 that stated there is no risk-free level of exposure to secondhand smoke. And like any other poison, secondhand smoke is most deadly at high levels of exposure. Picture a woman sitting in an enclosed room with her husband. If he smokes a pack a day for 55 years, her risk for lung cancer will be roughly six times higher than normal, according to a study published in the Journal of the National Cancer Institute.

Most secondhand “smokers” who get lung cancer have lived in a haze for many years. But that doesn’t mean secondhand smoke is safe in small amounts. As a study published in the Journal of the American Medical Association shows, even a little smoke is too much.

In a first-of-its-kind study, researchers at the Osaka City University Medical School in Osaka, Japan, put 30 healthy, young men in a smoke-filled room for 30 minutes. Using a special ultrasound device, the researchers examined the subjects’ arteries both before and after the exposure to secondhand smoke. Remarkably, just 30 minutes in a smoke-filled room caused measurable damage, possibly enough to help set the stage for atherosclerosis (hardening of the arteries), according to the study.

Secondhand smoke is harmful for everyone, but it’s especially hard on children. According to the American Lung Association, the smoke causes 150,000 to 300,000 cases of pneumonia and bronchitis every year in children under 18 months old. Up to 15,000 of these infants and toddlers need to be hospitalized. Children who breathe secondhand smoke are also more likely to suffer wheezing and coughing spells as well as middle ear infections. And in infants, exposure to secondhand smoke also increases the risk for sudden infant death syndrome (SIDS).

Cigarette smoke may also be contributing to the current asthma epidemic in young children. The disease is 20 percent to 30 percent more common in children whose parents smoke. And the more smoke, the greater the risk. A study published in the American Journal of Epidemiology found that children had four times the average risk for asthma if their mothers smoked more than 20 cigarettes a day. In actual numbers, exposure to secondhand smoke accounts for more than 200,000 episodes of childhood asthma each year, according to the 2006 Surgeon General report on secondhand smoke. The research is clear: If more parents could live without cigarettes, more children could live without inhalers.

If a child already has asthma, cigarette smoke is just fuel for the fire, according to the Environmental Protection Agency (EPA). Asthmatic children who live with smokers have more frequent asthma attacks and are seen and treated in emergency rooms than asthmatic kids who live in smoke-free homes.

Because smoking is so harmful to children’s health, the EPA urges all parents who smoke to take the agency’s Smoke-Free Home Pledge. The pledge boils down to this: You simply do not smoke in the house or around young children and infants, and don’t allow other people to do so. If you absolutely have to smoke, go outside. “Moving to another room or opening a window is not enough to protect your children,” the agency warns. The EPA also urges you to make sure your children aren’t exposed to tobacco smoke at their daycare, preschool, or school bus. (To receive a Smoke-Free Home Kit, call the toll-free number 1-800-513-1157.)

As awareness of the hazards of secondhand smoke grows, more and more businesses and communities are banning cigarettes from public places. Twenty-two states (Arizona, California, Colorado, Connecticut, Delaware, Hawaii, Illinois, Maine, Maryland, Massachusetts, Minnesota, Montana, Nebraska, New Jersey, New Mexico, New York, Ohio, Oregon, Rhode Island, Utah, Vermont, and Washington) have even banned smoking from almost all workplaces, including bars and restaurants. Of course, legislation is no substitute for common sense. If you ever find yourself surrounded by cigarette smoke, find a way to clear your air. Either the smoke goes, or you do.

If you’re a smoker and have trouble quitting, talk to your doctor. With the help of nicotine replacement products or a prescription drug that eases cravings, a support group, and your physician, you should be able to overcome the addictive pull of nicotine. Soon, you and everyone around you will be able to breathe much easier.

The Health Consequences of Involuntary Exposure to Tobacco Smoke, A Report of the Surgeon General, U.S. Department of Health and Human Services

“Smoke Free Inside and Out,” University of Rochester Medical Center.