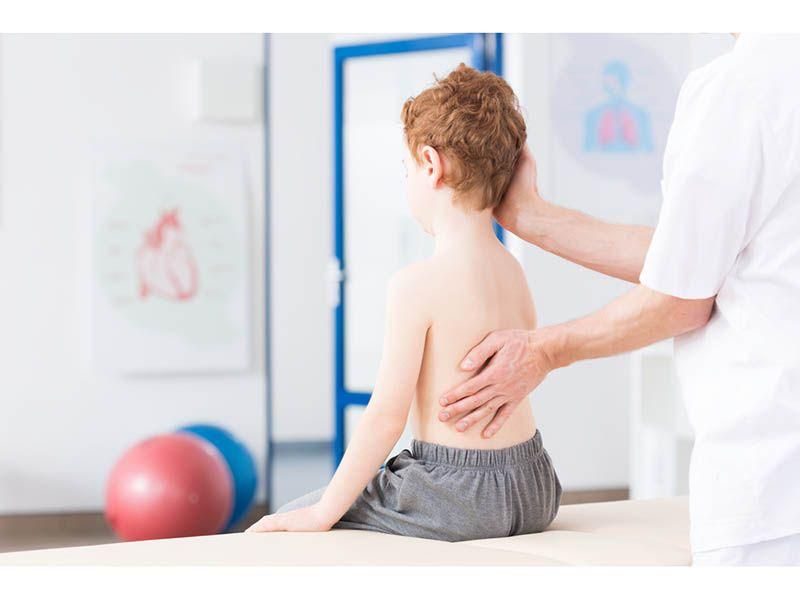 Nobody has a completely straight spine. Even if you sit as stiff as a board, the vertebrae in the middle of your back gently and naturally curve inward. Some people’s spines, however, take a different sort of turn. In addition to curving inward, they curve from side to side. This condition is called scoliosis, from the Greek word for crooked, “skoliosis.”

Most cases of scoliosis are so mild that they never interfere with a person’s life. And thanks to modern medicine, even serious curves can usually be managed successfully.

Scoliosis can first appear in young children or even infants, but most often it shows up during middle to late childhood, a time when the spine — and the rest of the body — goes through a growth spurt. According to the National Scoliosis Foundation, scoliosis affects 2 to 3 percent of the population. Boys and girls are equally likely to have minor curves, but major curves are about eight times more common in girls. Scoliosis often runs in families.

What are the signs of scoliosis?

Scoliosis usually doesn’t cause pain or limit a child’s movements, so it is easily overlooked. Most children receive a diagnosis during a routine physical. Still, alert parents can often spot early warning signs: A child’s shoulders may be uneven, one or both shoulder blades may stick out, the waist may be lopsided, the hips may seem unusually high, or the child may lean to one side. Parents should be especially watchful for these problems if someone else in the immediate family already has scoliosis. If you notice asymmetry, it’s a good idea to have the doctor check it out.

In adults, severe cases of scoliosis that are left untreated may cause pain, deformity, or breathing problems down the road.

In most cases, scoliosis arises for no apparent reason. Doctors call this idiopathic scoliosis. (Idiopathic is doctor speak meaning “the cause is unknown.”) Occasionally, scoliosis is the result of an illness, birth defect (such as cerebral palsy), or injury to the spine. It is NOT caused by poor posture.

What is the treatment for scoliosis?

Most kids with scoliosis never need treatment because the curve in their back is too small to cause problems. If the doctor is worried that a problem may be developing, he may want to see them every four to six months throughout adolescence to make sure the curve isn’t getting worse.

Doctors measure spinal curves in degrees. If a curve is fairly large — between 20 degrees and 40 degrees — and a child is still growing, the doctor may recommend a brace to keep the curve from getting any worse. The most commonly used brace fits under the arm, not around the neck like older models. The child may need to wear it for about 16 hours every day until growth stops. Some doctors also prescribe a nighttime brace. Any brace must be checked regularly to make sure the fit is as snug and comfortable as possible.

For mild scoliosis, your doctor will simply use “watchful waiting” and observation. Children with moderate to severe scoliosis may need to wear a brace, and very severe scoliosis (a curve of 40 to 50 degrees) may require surgery.

Most patients can walk the day after surgery and go home within four to five days. They won’t have to wear a brace, but they may have to avoid vigorous activities for nine to 12 months. Even after that time, they may not be able to play high-contact sports such as football.

Are there any other ways to treat scoliosis?

Braces and surgery are the only known treatments for scoliosis. Some people seek help from chiropractors or try special exercise programs, but there’s no evidence that these approaches can correct scoliosis or keep it from getting worse.

National Institute of Arthritis and Musculoskeletal and Skin Diseases. What Is Scoliosis?