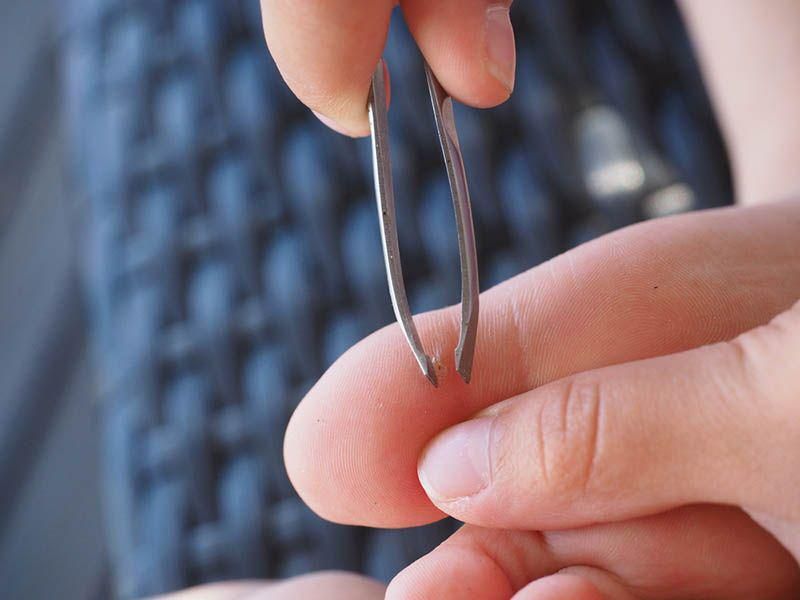 Getting a splinter is a common occurrence, but removing one is easy. It’s important to do so right away, however, since splinters left in the skin can become infected. Be careful not to let a wooden splinter get wet for very long because the moisture will make it swell.

Start by washing your hands with soap and water, then washing the affected area. If one end of the splinter is sticking out of the skin, grasp it with tweezers and gently pull it out. (Remember to pull in the opposite direction from the way the object entered the skin.) Clean the area well with soap and water, and apply a bandage.

If the object is completely embedded in the skin, you’ll need to enlarge the puncture in the skin through which the splinter entered, or create a small opening to reach it, using a sterilized needle or tweezers as tools. In difficult cases, you may need to visit a doctor or nurse to have this done for you.

Wash your hands, then clean the affected area with soap and water as well. Next clean the needle, either by rinsing it in alcohol, holding it in a flame for a few seconds, or boiling it for about five minutes. If you use a flame, protect your fingers by grasping the needle with a piece of cloth, and wipe off any carbon deposit that may be left on the needles tip.

For a splinter under a fingernail

If the splinter is embedded too deeply to reach, use nail clippers to cut a V-shaped notch in the nail above the splinter. Remove just enough nail to allow you to reach the splinter with the tweezers. Then wash the area with soap and water, and apply an antibiotic ointment and a bandage.

When to see a doctor

Watch for signs of infection. These include a mild fever, pus, swelling, redness, or a feeling of heat radiating outward from the site of the splinter. If the area becomes infected, call your doctor. It’s also important to call your doctor if:

You probably don’t have to worry about very small splinters in areas of the body that don’t pose a danger. They will usually just disintegrate or fall out by themselves as the skin grows and exfoliates.