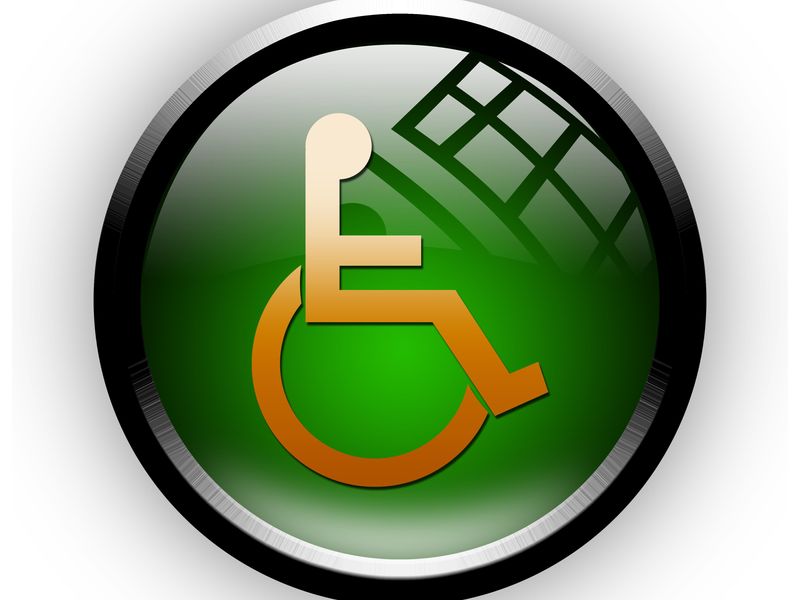 Building a ramp will get any wheelchair to a doorway that is normally approached by steps. But even the best-made ramp won’t do you much good if you can’t get the chair into the house. After my brother Miguel’s car accident, which left him paralyzed from the neck down, we worried that his doors wouldn’t be big enough to accommodate his power wheelchair.

But we were lucky: Miguel’s chair fit through the door of the new house. Most doors come in standard sizes, with some — like his — that are big enough to accommodate a wheelchair without remodeling. Common widths in residential construction include 30- and 32-inch doors, although 36-inch front entry doors can be found in old or even relatively modern homes. With a door fully opened, most doorways provide a clear opening up to two inches narrower than the size of the door. Given a direct approach, many wheelchairs will fit through a clear opening 30 inches wide. However, considering the variation in chair sizes and individual abilities, only the person negotiating it in her own wheelchair can determine exactly how wide the door opening should be.

If you find a doorway to be too narrow, don’t get the chainsaw out immediately: Consider these two inexpensive options. The first is to install offset hinges that allow the door to swing clear of the doorway. This will add about 1 or so inches to the opening. Secondly, you can remove an interior door — along with the doorstop strips — to gain another half-inch or so, and replace the door with a curtain. I’ve done this when my brother comes to visit, and found that as a bonus, he also gains the space inside the room that would normally be required for the door to swing open.

You may need to install a wider door in some situations, such as narrow bathroom doorways or those requiring sharp turns to negotiate. A 36-inch door will often suffice, though I’ve used a 42-inch door to allow a 90-degree turn into a bedroom from a narrow hallway. Creating a wider opening to accept a new door entails reframing and some plastering as well as a bit of floor work. Light switches, often placed right next to doors, may need to be moved over a few inches when a doorway is widened.

Besides the size of the opening, you also need to consider the swing of the new door. To provide adequate maneuvering space in a small room such as a bathroom, it may prove beneficial to swing the door out rather than into the room. Better yet, avoid swinging the door altogether: Install a sliding or pocket door instead.

Ever since I saw Miguel lunge forward and smash his finger against a doorframe while trying to go over a threshold, I do what I can to eliminate thresholds below my doors. Normally found under exterior doors, thresholds often present a barrier at a point when wheelchair users are busy negotiating a narrow doorway. When they must be used, they should be beveled and ideally kept to a maximum height of a quarter inch. In some cases, I’ve removed them altogether and replaced them with door-mounted weather strips. For someone in a wheelchair who has use of his hands but diminished grasping abilities, install lever type-handles for opening doors; they’re easier to operate than doorknobs. Alternatively, you can install remote-operated door opening devices.

Making it easy to wheel around inside

The house Miguel rented proved adequate for more than a year. It was ample enough to move about comfortably and only a few blocks from his office at the university, making his transition back to work a little easier. The downside was that he was paying rent for a house that was bigger than he needed. Two of the three bedrooms were not easily accessible and were not being used for live-in caregivers, as he had previously planned. By the time I visited him in Albuquerque again, he was ready to shop around for a house he could call his own. Within a week we stumbled onto a sweet little two-bedroom house with a big, level yard that seemed to fit the bill. Paying a mortgage that was quite a bit lower than what he had been spending on rent, he could consider making the necessary changes to make his new home accessible.

The good news is that even modest-size dwellings can be designed, given a little ingenuity, to adequately accommodate a wheelchair user. Generally, a person seated in a wheelchair requires a 60-inch circle to comfortably change direction within a room. Wall-mounted cabinetry and work surfaces or furniture such as tables supported by a base at the center can provide enough foot or knee clearance to make use of a tight spot. Beware of sharp corners or protruding objects, though, especially if hidden from view by a tablecloth or a different type of covering.

Sometimes removing a single wall or even part of one can make a house wheelchair accessible. Since turning the wheelchair into or out of hallways often presents difficulties, you may wish to remove one wall of a hallway separating, say, a living room from a bedroom, absorbing the space into one of the rooms. Partition walls are easily removed. Removing load-bearing walls, on the other hand, requires more extensive structural changes. As far as flooring is concerned, hard surfaces tend to work best. If you’ve been dying to replace that old shag carpeting with hardwood or Italian tile, now may be a good time. Thick, plush carpeting laid over soft padding prevents wheelchairs from rolling easily. Short pile or woven carpets may work well for some, as will more affordable surfaces such as vinyl or laminate flooring.

Those who require access to a second story have a couple of choices, depending on their abilities. Stair lifts, mounted along reinforced railings or walls, commonly require the user to transfer onto an attached seat before being transported to the next level. They tend to be less expensive than enclosed elevators, which can easily cost upwards of $20,000 to install. We avoided these problems by finding Miguel a house that was as flat and level as Albuquerque itself.

Now it was time to tackle the bathroom and kitchen. But as we’d soon discover, some things were easier said than done.

Nondiscrimination on the Basis of Disability by Public Accommodations. Federal Register. Department of Justice, Office of the Attorney General. Part III, 28 CRF Part 36.