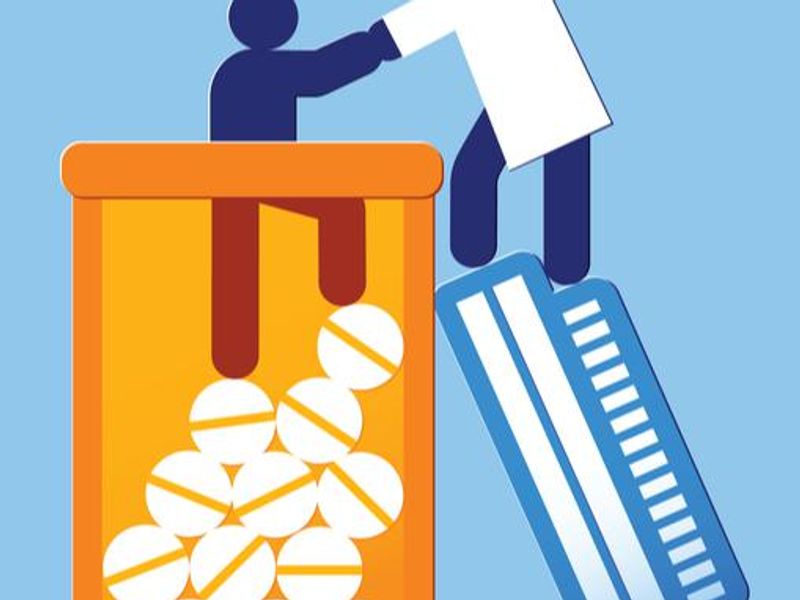 What image comes to mind when you think of a drug addict? Do you picture someone smoking crack or shooting heroin? You’d be wrong. A typical drug abuser could easily be your next-door neighbor, the teen who babysits your kids, or the grandmother you chat with at the grocery store. That’s because drug abusers could be abusing the medication they bought at the local pharmacy.

About 7 million Americans abuse prescription drugs, according to the last available statistics. That is far more than the number of people who abused crack cocaine, ecstasy, and heroin combined.

Most people don’t become addicted to the prescription drugs they take. But there are many who are getting drugs without a prescription or using prescription drugs to get high. It’s especially common among young people. In fact, according to government estimates, prescription drug abuse is second only to marijuana use among 12 to 17-year-olds. A 2010 study found that the number of prescriptions for controlled medications such as opioids and stimulants has nearly doubled in adolescents and young adults since 1994, a trend that reflects a similar pattern of misuse among that population.

In addition, abuse of prescription pain relievers appears to be on the rise among people of all ages, educational levels and ethnicities. In substance abuse treatment centers, admissions for non-medical use of prescription pain relievers have increased more than 400 percent over 10 years, according to another 2010 government study. The rate of admissions among people 12 and older rose from 2.2 percent in 1998 to 9.8 in 2008, according to the Substance Abuse and Mental Health Services Administration, which called it one of the most prevalent form of illicit drug use in the nation.

What are the most commonly abused prescription drugs?

With the right supervision and taken as directed, you don’t have to worry about becoming so dependent on a prescription drug that you crave more. But it is easier to get hooked on certain types of drugs.

According to the National Institute on Drug Abuse (NIDA), there are three types of commonly abused prescription drugs: opioids, depressants that affect the central nervous system (CNS), and stimulants that enhance brain activity.

These painkillers are prescribed to patients in severe pain after surgery, or for people who suffer from chronic conditions. They include morphine, codeine, oxycodone (OxyContin), propoxyphene (Darvon), hydrocodone (Vicodin), hydromorphone (Dilaudid), and meperidine (Demerol).

In addition to dulling pain, opioids can also cause feelings of euphoria, even at prescribed doses, according to Dr. Amanda Gruber, associate chief of substance abuse in the biological psychiatry laboratory of the Harvard-affiliated McLean Hospital. Possible side effects of taking opioids include slowed breathing, constipation, nausea, sleepiness, dizziness, vomiting, headache, dry mouth, and sweating. Combining different types of opioids or taking one large dose can cause death. Although rare, a large overdose of opioids can slow your breathing to a dangerously low level.

These drugs slow the brain’s ability to function and are used to treat anxiety problems, acute stress, and sleep disorders. They include barbiturates such as mephobarbital (Mebaral), and benzodiazepines such as diazepam (Valium), lorazepam (Ativan), clonazepam (Klonopin), temazepam (Restoril), chlordiazepoxide HCI (Librium), and alprazolam (Xanax).

Experts at NIDA caution against using depressants in combination with other drugs — especially alcohol — because this can have serious side effects. Users may not realize that alcohol and some over-the-counter allergy medications are also CNS depressants. According to Gruber, taking benzodiazepines with alcohol, for example, has an addictive affect, which makes people drowsier and more uncoordinated than they might realize, and puts them at risk when driving.

Mixing alcohol with barbiturates is even more dangerous. This combination can slow your breathing and heart rate, and possibly lead to death. However, Gruber says that doctors now rarely prescribe barbiturates, because benzodiazepines are considered more effective.

These drugs do the opposite of CNS depressants. Instead of slowing your brain, they enhance activity, making you more alert, anxious, and energetic. They include dextroamphetamine (Dexedrine) and methylphenidate (Ritalin), which are used to treat attention-deficit hyperactivity disorder.

The National Drug Rehab Referral Alliance says stimulants are usually safe when taken as directed. But users can develop a range of uncommon side effects, including dangerously rapid heartbeat, burst blood vessels, fever, and fatal seizures.

How do you know if you’re addicted?

One report from NIDA says that only four of every 12,000 patients taking opioids for pain become addicted, so if you’re following your doctor’s directions, you shouldn’t have to worry. But if you need larger amounts of a drug to produce the same effects, or if you’re asking your doctor for larger doses, that may be a sign that you’re developing a tolerance. If you’re concerned about being addicted, ask yourself a few simple questions:

If you answered yes to any of these questions, have a frank talk with your doctor to see if you have a problem.

Work with your doctor if you think you’re becoming more tolerant to a drug, or even if you think you no longer need it. Becoming tolerant to a drug isn’t a good reason to stop taking it. It may mean your disease is worsening and you need a higher dose. Don’t try to go off prescription medications on your own — your doctor can help you taper them slowly so you don’t develop severe withdrawal symptoms.

How can you recognize the signs of addiction in others?

If you’re concerned that a loved one may be abusing prescription medication, be alert for certain warning signs. According to Cancer Pain Release, a publication of the World Health Organization, the following changes in behavior may signal an addiction.

For example, conservative talk show host Rush Limbaugh confessed that he became addicted to the painkiller OxyContin after undergoing spinal surgery. In addition to admitting his addiction, Limbaugh also revealed that he asked his former housekeeper to buy them illegally when his prescriptions ran out.

Once a person becomes physically dependent on a drug, certain symptoms — called withdrawal — will set in if the body doesn’t get the drug. For addicts, that may be reason enough to continue taking drugs illegally, even when they know it’s harming them.
The Center for Substance Abuse Treatment says opioid users in particular shouldn’t stop taking the drug abruptly. Instead, they should seek professional treatment to determine how best to taper off the drug. When a person withdraws from a painkiller such as OxyContin, for example, he may feel restless, experience muscle and bone pain, insomnia, diarrhea, vomiting, cold flashes with goose bumps, and involuntary leg movements.

According to Gruber, withdrawal from benzodiazepines is generally mild. The most common symptoms are insomnia, nervousness, and restlessness, which can be eased by quitting the drug gradually. Rarely, people who have been taking benzodiazepines at very high doses for prolonged periods will experience extreme anxiety, a psychotic reaction, or a seizure, if they go off the drug abruptly.

Withdrawal from other less commonly prescribed depressants, such as barbiturates, can be life-threatening. Symptoms include elevated heart and respiration rate, tremors, hallucinations, confusion, seizures, and if left untreated, possibly death. They appear 12 to 20 hours after the last dose.

Withdrawal from amphetamines can result in depression, drowsiness and lack of alertness, increased appetite, and strong cravings for the drug.

How is addiction treated?

Because addiction involves both psychological and physical dependence, treatment often requires a combination of behavioral modification therapy and medication. Behavioral modification focuses on helping people function without drugs and teaches them how to combat cravings and avoid situations where they might be inclined to fall back into abuse.

Doctors may prescribe medications in order to relieve withdrawal symptoms, counteract the effects of the abused drug, and help lessen cravings — particularly in cases of opioid addiction. Methadone has been used for over 30 years to manage opioid addiction, but it requires daily trips to a methadone clinic. The Food and Drug Administration (FDA) has also approved the use of another drug called buprenorphine to manage opioid addiction. This drug can be prescribed in a doctor’s office. It appears to produce a lower level of dependence and is less likely to cause overdose problems.

However, Gruber emphasizes that methadone programs are usually not the first course of action for treating an addiction to prescription opioids. These approaches were designed primarily to prevent street users of heroin from resorting to crime to support their habit, and such maintenance programs are not ideal because they create a low-level dependence on a “replacement” opiate for as long as the user remains in the program.
Instead, Gruber says that most people who are addicted to prescription opioids should ease off the drug gradually with the supervision of a medical professional. Doctors often prescribe naloxone hydrochloride, a drug that blocks the effects of opioids, she says. That way, patients are less likely to fall back into addiction if they have a relapse.

Why is prescription drug abuse on the rise?

There are several theories, including the rise in Web-based pharmacies that sell drugs without prescriptions or in-person consultations. It’s easy to get multiple prescriptions this way, particularly if you use different online pharmacies.

That’s the reason the DEA and the FDA have targeted such companies as some of the major culprits in the rise of prescription drug abuse. The two agencies have begun investigating and shutting down “e-pharmacies” and “pill mills” illegally selling prescription drugs over the Web to people without prescriptions. To support these efforts, the U.S. Senate passed a bill that amended the Controlled Substances Act to address online pharmacies.

Others cite the aging of the “baby boomer” population as another cause. More seniors than ever before are being prescribed drugs — especially painkillers, and pain relievers are easily the most commonly abused prescription medication.

NIDA cites four groups that are most at risk for misusing drugs:

Seniors are three times more likely to take prescription medications than other people and are less likely to follow the instructions on the bottle. According to data from the Veterans Affairs Hospital system, they also are prescribed higher doses of some medications — like benzodiazepines — for longer periods. All of these factors combine to make prescription drug abuse more likely.

Teens and young adults make up one of the fastest-rising groups of prescription drug abusers. In the 1990s, Ritalin use grew among high school students, and the recreational use of pain relievers such as Percodan (oxycodone with aspirin) and Vicodin (hydrocodone) increased among college students, according to NIDA. In the last available statistics, over 12 percent of teens aged 12 to 17 reported that they had used prescription drugs for non-medical purposes. Over the last decade, the recreational use of Oxycontin and Vicodin increased among high school sophomores, while that of Ritalin appears to have declined.

According to NIDA, women are more at risk for prescription drug abuse because they’re more likely to be prescribed an addictive drug, such as an opioid or anti-anxiety medication. Researchers have found that when they are given opioids in similar numbers, men and women were equally likely to become addicted.

Physicians, nurses, pharmacists, and other health care workers who have easy access to prescriptions on the job may be at risk for prescription drug abuse.

The truth is, there is no typical drug abuser. Among the old and young, prescription abuse is on the rise in America. The best way to prevent addiction and death is to take prescription medications responsibly.

Office of Applied Studies. 2007 National Survey on Drug Use and Health.

National Institute on Drug Abuse. What are the treatments for heroin addiction?

Interview with Dr. Amanda Gruber, associate chief of substance abuse in the biological psychiatry laboratory of the Harvard-affiliated McLean Hospital