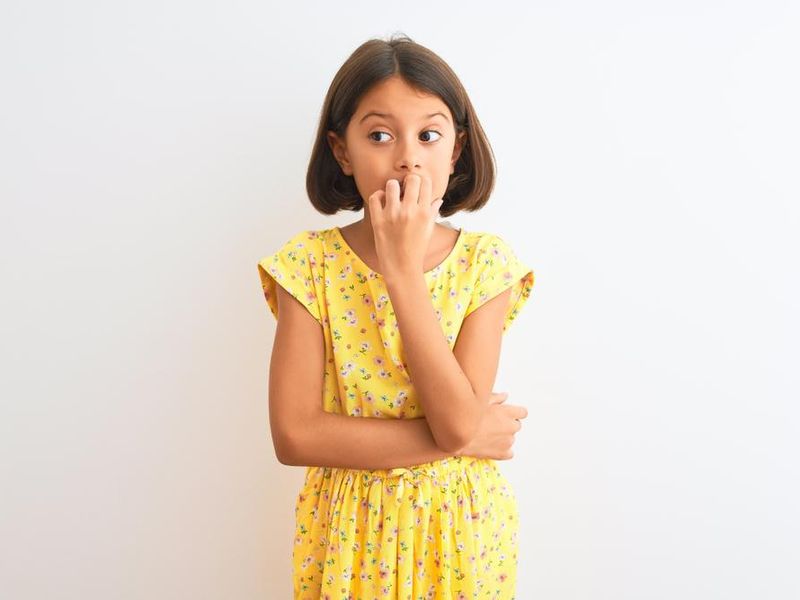 Why does my child bite his nails?

Children bite their nails for many reasons — out of curiosity or boredom, to relieve stress, to pass the time, or from force of habit. Nail biting is the most common of the so-called “nervous habits,” which include thumb sucking, nose picking, hair twisting or tugging, and tooth grinding. (None of these necessarily signals anxiety, so “nervous habits” is something of a misnomer.) Nail biting is most common in high-strung children, tends to run in families, and is the most likely of the nervous habits to continue into adulthood. About 30 to 60 percent of elementary school students and 20 percent of adolescents bite their nails, at least for a time; between one-quarter and one-third of college students say they still bite their nails.

Is my child’s nail biting a sign of excessive anxiety or some disorder?

Growing up is an anxious process, and many of the tensions and pressures are invisible to parents. If your child bites moderately (he doesn’t injure himself) and unconsciously (while watching television, for example), or if he tends to bite in response to specific situations (such as performances or tests), there’s probably nothing to worry about.

If you know or suspect that a particular situation is making your child anxious — a recent move, a divorce in the family, a new school — make a special effort to help him talk about his feelings.

If your child’s nail biting seems self-destructive, however, it’s time to call his doctor or school counselor. You should be concerned, for example, if his fingertips are ragged and bloody, or if in addition to biting his nails, he picks his skin, tugs on his eyelashes, or is not sleeping well. Also consult your child’s doctor if the habit of nail biting surfaced suddenly and escalated quickly. You always want to check out the reasons behind a drastic change in your child’s behavior.

If, on the other hand, the habit doesn’t seem to pose any physical or psychological threat, ignoring it is the best way to ensure that down the road your child will either stop on his own or ask you to help him quit.

How can I get my child to stop biting his nails?

Unfortunately, when it comes to unconscious habits, nagging and punishing are at best ineffective and at worst lead to a power struggle.

You might try offering your child a substitute habit — a “worry stone” to keep in his pocket, for example. Gently and consistently calling his attention to the fact that he’s biting his nails may help; agree on a signal you can give him so you don’t embarrass him in public. For example, at breakfast you might tell him calmly, “Honey, it would be nice if you could not bite your nails today,” and explain that you’ll touch his hand lightly with your index finger every time you see him nibbling.

If the habit bothers you, set limits. “No nail biting at the dinner table” is as reasonable a rule as “No feeding the dog from your plate.” At other times, explain in a compassionate way that you know he can’t help it, but you don’t like to watch him biting his nails, so you’re going to another room for a few minutes.

The most important thing is to keep what’s basically a nuisance from escalating or getting laden with emotion. Stifling your anger for as long as you can and then snapping, “Stop biting your nails! I can’t stand it!” is a recipe for disaster. If the situation is already tense, defuse it by being straightforward — “I think we’re both getting too worked up over this. I’m going to take a time-out from it for a while.”

How can I help when my son tells me he wants to stop biting his nails?

Start by building a foundation. Discuss what nervous habits are and how people can break them. (Janet Munsil’s Where There’s Smoke …, in which nail-biting Daisy and her cigarette-smoking father try to end their habits together, is a good conversation-starter with younger children.) Decide how involved you should be in his plan to quit. Does he want you to remind him or will that irritate him? An older child will probably prefer less parental involvement.

If your child feels that reminders from you will help, choose a subtle signal — a light touch on the arm or a code word. Encourage him to become more aware of when and where he bites, and identify some relaxation techniques he can learn — deep breathing, or clenching and releasing his fists. You might attach a small pair of fingernail clippers to his key chain or belt loop, so he won’t be tempted by snags. If he’s old enough, teach him how to use an emery board and keep one on his bedside table or in a bathroom drawer.

Step three (and steps four and five and onward) are to try — and try again. Explain to your child that different people respond to different techniques, and encourage him to be willing to try a variety of solutions if the first one doesn’t work. In general, the older he is, the more responsibility he can take in this endeavor.

Children of all ages, like adults, may find a substitute habit useful (Silly Putty for car rides, a smooth stone to hold while reading or watching television). Let your child choose an activity. If he’s under the age of 8 or 9, he might need help in making the switch: Practice the alternative habit with him for a few minutes before school or at bedtime.

Calendars work well for children up to about age 9. Let your child select and place stickers on the days he doesn’t bite his nails. For an older child, set up an incentive savings plan, in which he deposits $1 to start and then you put in $1 for every day he leaves his fingertips alone. Another incentive might be a trip to the nail salon for a manicure once the nails have grown to a certain length.

Physical reminders work for some kids: Your child may want to try keeping Band-Aids or stickers on his fingertips. Finally, remind him — and yourself — that habits are hard to break and that the two of you are on the same side. Take a break from habit-breaking if you need to. Eventually your patience and persistence will pay off.