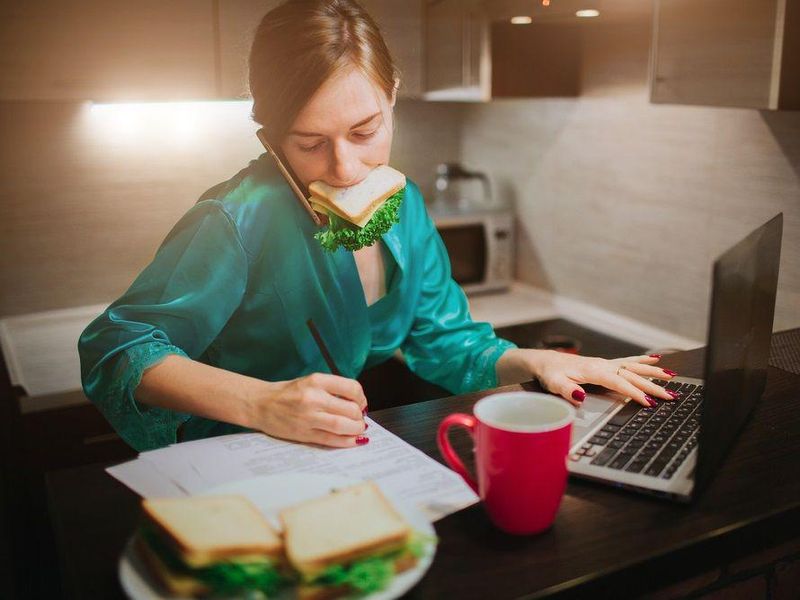 In this high-tech, high-pressure age, multitasking has become a national pastime. No matter where we are or what we’re doing, we can always add one more ball to the juggling act. Many people regularly check their IPhone while they’re in a restaurant, ignoring their family while they catch up on emails or Tiktok.

“Because of all of the new electronic gadgets like cell phones, Palm Pilots, and other personal digital assistants, multitasking has exploded, says David Meyer, PhD, a professor of psychology, cognition and perception at the University of Michigan.

Doing several tasks simultaneously may seem like the height of efficiency — and it would be, if a person had more than one brain. In the real world, multitasking actually wastes time and reduces work quality, Meyer says.

Missed deadlines and shoddy work may get a person fired, but they’re not the most worrisome consequence of multitasking. According to Meyer, juggling tasks can be very stressful. In the short term, stress makes you feel lousy. In the long term, it can become a serious threat to health — and that’s not even counting the dangers of sending a fax while changing lanes.

One brain, one task

Meyer sees three major types of multitaskers. Some people do it out of desperation. In their minds, talking to a client while doing research on the Internet is the only way to keep up. Other people multitask impulsively. They’ll abandon a report in mid-sentence to check email without thinking about the consequences. The third group multitasks with pride. “Many people delusionally believe that they’re good at this,” he says.

Some people’s jobs, like air traffic controllers and emergency room doctors and nurses, virtually demand multitasking under pressure. But in reality, nobody can effectively do more than one remotely complicated thing at a time. “The brain is not equipped to do heavy-duty multitasking,” Meyer says. “People are being asked to do multiple things, but they would need superhuman abilities.”

Multitasking is especially futile if the different activities use the same part of the brain, Meyer says. For example, the brain only has one language channel. If a person tries to read while talking, one or both tasks will get short shrift.

Whenever demands exceed abilities, stress is bound to follow. Multitasking is especially stressful when the tasks are important, as they often are on the job, Meyer says. The brain responds to impossible demands by pumping out adrenaline and other stress hormones that put a person “on edge.” These hormones provide a quick burst of energy, but energy won’t make multitasking easier, he says. An old pickup can’t go 150 miles per hour no matter how much fuel you put in the tank or how hard you step on the gas.

Over time, the stress of multitasking may even become dangerous, Meyer says. A steady flow of stress hormones can strain the body and threaten health. As recently reported by the National Institute for Occupational Safety and Health, numerous studies have found that on-the-job stress can cause headaches, stomach trouble, and sleep problems. Chronic work-related stress can lead to chronic problems, including back pain, heart disease, and depression.

Not only is multitasking risky, it’s counterproductive. Meyer and colleagues published a report in the Journal of Experimental Psychology: Human Perception and Performance that exposed a major pitfall of juggling tasks.

The researchers studied young people who were attempting to quickly shift from one job to another. Without exception, the shift took time — time where absolutely nothing productive happened. In many cases, the lag was only a half second or so. But Meyer notes that’s a long time to be lost in space, especially if one of your tasks involves operating a steering wheel. Even if you’re multitasking at the office, all of those half-seconds can add up to a serious waste of time.

It’s worth noting that these subjects were in a laboratory setting, and they were trying their best to move quickly from one task to another. In an office setting, shifting gears can take much, much longer. Gloria Mark and colleagues at the University of California at Irvine observed how actual office workers handle interruptions, whether it’s a phone call, an incoming email, or a visitor to their cubicle. As reported at a conference for the Association for Computing Machinery, the average worker needed a staggering 25 minutes to return to their original task after the interruption was over.

To make things worse, Meyer says, multitasking can interfere with short-term memory. “Anytime you’re trying to multitask, you have less attention available to store memories,” he says. For example, a person who tries to read email while talking on the phone will have a hard time retaining any of the information. And if the phone rings while a person’s in the middle of a thought, it will take a while to find that thought again — assuming it can be recovered at all.

Short-term memory loss isn’t always a short-term problem. The flood of adrenaline and other stress hormones unleashed by trying to do too much at once can actually cause permanent damage to the brain cells that store memories, Meyer says. After years of multitasking, a person might eventually have trouble doing just one thing at a time.

So what should a person do when the phone rings and the email pings? Meyer urges people to organize their work life to cut down on multitasking as much as possible. That means ignoring the phone and turning off your email alerts while you’re working on an important project. You can always check your messages later. When that task is over, take a break to clear your thoughts and refresh your mind.

No matter how demanding your job is, you can take steps to protect yourself from stress. Meyer recommends meditation, regular exercise and a healthy diet. Just don’t try doing all three at once.

Interview with David Meyer, PhD, a professor of psychology at the University of Michigan