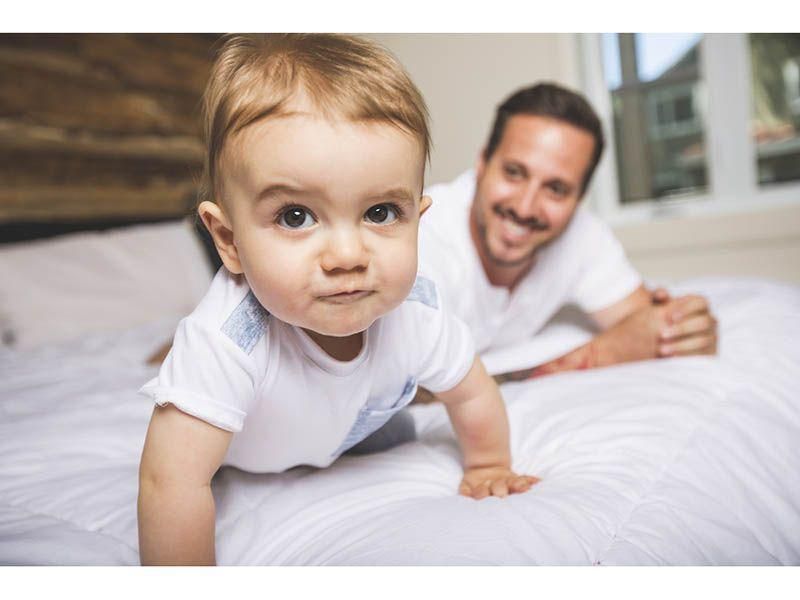 Your baby continues to add new moves to his repertoire. He may now be able to crawl while holding something in his hand, opening up brand-new opportunities to put things where they don’t belong. He might be able to spin around on his bottom, a move he’ll practice over and over. He might also be able to stand briefly if you hold his hand.

At his age, standing is usually exciting business. He’ll continue to pull himself up on the couch or the coffee table as often as possible, and he’ll use every available supporting object to help him cruise around the house. His legs are getting stronger and his balance is improving, but he’s still a long way from fall-proof. Try not to fuss too much when he tumbles over. Give him some quick comfort and let him get back to business. If you don’t make a big deal about a little fall, he probably won’t either.

At the same time, you’ll have to take steps to prevent big falls. Ideally, you installed sturdy gates at the bottom and top of any stairs some months ago to keep your little crawler out of trouble; if not, you should do it now. Now that he’s crawling and cruising, those stairs will be more appealing than ever before. He may be ready to practice going up stairs, but only with extremely close supervision. He probably won’t be able to go down stairs until he’s at least one — although that won’t stop him from trying, so it pays to keep a close watch on him. You can help him safely practice his climbing skills letting him scale foam blocks or sturdy cardboard boxes covered with fabric.

You can’t simply tell your baby to stay away from stairs or other hazards. Even if he can understand your requests, curiosity will get the best of him. Now that he’s roaming around, it’s time to baby-proof every part of the house, if you haven’t already done so. In the long run, making your house safe will save you a lot of stress. Your baby will stay busy and happy as he freely explores his world, and you won’t have to spend the day saying “No!” or “Don’t touch that!”

While you baby-proofed the house, you were probably especially careful to put small items such as coins, buttons, and batteries well out of reach. It’s worth doing another safety check, though: Your baby can now easily pick up small things with his thumb and forefinger. And once he has an item in his grasp, it’s probably headed for his mouth.

On the bright side, his dexterity will come in handy at mealtime. He might have the coordination to drink small amounts from a cup, and he’s definitely ready to try all sorts of finger foods. Offer him small pieces of soft cheese, rice cakes, toast, cereal, cooked veggies, soft fruits, and tender, shredded pieces of meat. He’s not ready for hard foods such as nuts or popcorn, and you definitely shouldn’t give him “slippery” foods such as hot dogs or whole grapes. These foods could slide into his windpipe and get stuck before he has a chance to chew, causing him to choke.

His mouth will stay plenty busy even when it’s not mealtime. He’ll love to suck and gnaw on everything from his books and rattles to his fingers and toes. In fact, grabbing his feet and sucking on his toes may be one of his favorite activities. He enjoys discovering his own body, and toes happen to be especially amusing.

With a little horseplay, playtime can reach new levels of excitement. Many dads, in particular, love to swing, bounce, and toss their babies, but it’s the little ones who really benefit. Physical play helps babies understand the potential of their own bodies. A little bit of rough-and-tumble improves their strength and coordination while giving them a boost of confidence. It also happens to be really fun.

Horseplay makes some parents nervous, but a little is usually safe — as long as you take a few basic precautions. Your baby’s young joints can’t take much stress, so you shouldn’t lift him up or swing him around by his arms. Hold him by the chest or underarms instead. Be careful — it’s not as hard as you might think to drop a baby. And remember: It’s never OK to shake a baby, even in the name of fun. Shaking can cause severe brain damage and permanent disabilities.

It’s no wonder that your baby loves physical play. After all, he still gets a thrill from simply sitting up or crawling. Moving is fun. And even though he can’t walk yet, he’s taking some big steps every day.