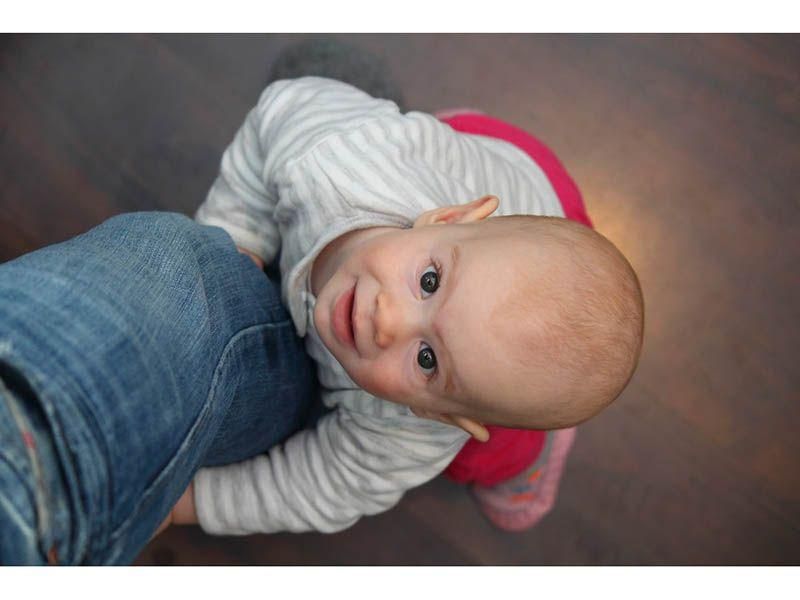 Your baby is full of emotions, and he’s more than willing to put them on display. He can go from laughter to tears and back again faster than you can change his clothes. Dealing with his up-and-down feelings can be a tiring job, but there’s an upside: If you don’t like his attitude, just wait a few minutes. He’ll soon have a new one.

The more time you spend with your child, the happier he’ll be. At his age, nothing is more comforting or entertaining than the sight of your face. He’ll usually light up when you enter a room, and he’ll complain when you leave.

If you’re not careful, those complaints could blossom into a bad habit. During his first six months or so, you never had to worry about giving him too much attention when he cried. But if he wails for no apparent reason at this age, immediate hugs and cuddles can just encourage him to cry more often.

When he cries for your attention, delay your response for a little while to encourage him to learn to calm himself down. Although this may be difficult, it’s a good idea to let your baby know when you are happy with his behavior and when you are not. When he calms down, give him a hug and redirect him to another activity.

Of course, you can cut down on frustration for both of you by anticipating his needs before he breaks into tears. By spending a lot more time letting him know when you are happy and not dwelling on the negative, you can focus your baby on positive behavior. This is often the best way to erase behavior you want to extinguish.

If he’s been by himself for a while, take some time to play with him. If you just don’t have the time, make sure he has other interesting things to do. If he’s happy and occupied, he’s less likely to demand your attention. If he’s still fussy, you may want to carry him with you in a baby sling — babies who are carried tend to cry and fuss less, according to some pediatricians. And even though small babies can’t understand you yet, it’s good to get in the habit of explaining your behaviors in a calm and reasoned manner. Babies eventually will pick up on nonverbal cues and understand more and more of what you say.

You’ll have plenty of other chances to put loving discipline into action. When those busy little hands grab the cat’s tail or knock off your glasses, you’ll want to give him a firm “no” and redirect him to a more acceptable activity.

When you say “no” or “don’t grab the cat,” he’s likely to get the message loud and clear. He still doesn’t know many words, but he’s getting much better at reading your facial expressions and the tone of your voice. A stern look will speak volumes, and so will a smile. So use them wisely and pick your battles carefully.

He’s deeply attached to you, but he might not be comfortable around other people. He might even scream if you try to hand him over to an unfamiliar person. “Stranger anxiety” at this age is completely normal. It’s also a testament to the strength of your relationship. When he yells at Aunt Patty, he’s simply saying that he trusts you more than anyone else. Let him meet people at his own pace, and be reassured that this stage is temporary. In just a few months, he’ll be ready to socialize without the screams.

University of Florida, Department of Family, Youth, and Community Sciences. How I Grow: Months Seven and Eight. http://edis.ifas.ufl.edu/fy635

Zero to Three, The American Academy of Pediatrics. Healthy Minds: Nurturing Your Child’s Development from 6 to 9 Months. http://main.zerotothree.org/site/DocServer/6-9months.pdf