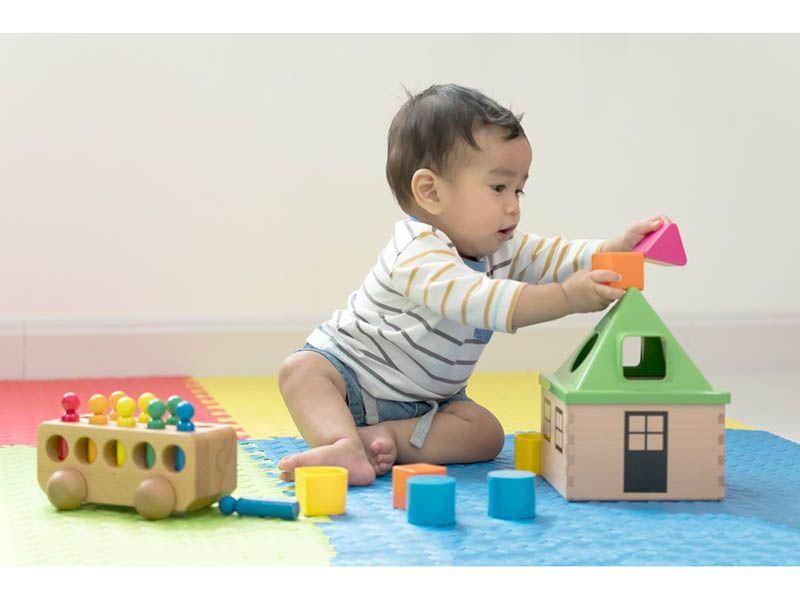 Your baby has a lot on his mind. Now that he’s moving around, he faces all sorts of new decisions and dilemmas. Which part of the house should he explore next? What’s the best way to get there? And what should he do once he arrives? He’s also thinking harder about the world around him and his place in it. Even when he makes bad decisions — why would he put oatmeal there? — he’s constantly building brainpower.

His days are filled with exercises in problem solving. For instance, he has to think about the best way to crawl. Babies don’t get manuals or training videos, so they have to figure it out on their own. Different babies develop different techniques, from the classic crawl to the snake-like slither to the backwards crab-crawl. Some decide to skip crawling all together and go directly from scooting on their bellies to cruising on two feet. In the big picture, one style is just as good as any other. The important thing is that your baby had a goal — getting from one place to another — and found a way to reach it.

He’s also thinking about how other things move. Whenever he throws a ball or knocks a bowl from his highchair, he’ll watch the flying object with fascination. You can encourage him by giving him plenty of fun things to drop and throw. When he’s having a bath, give him plastic cups or other toys that he can fill and pour. Anything that floats, squirts, or squeaks will be a big hit. You should also give him many chances to have fun with “cause and effect.” He’ll enjoy flipping a light switch or pushing the buttons on a musical toy. Every time the light goes on or the music starts, he gets a reminder that he has some control over the world.

It’s easy to slip new learning experiences into playtime. Try sitting him up in front of some small toys just out of reach on top of a placemat. After thinking for a while, he may discover that he can move the toys closer to him by simply pulling on the placemat. Here’s another good brainteaser for a baby of this age: Give him one toy for each hand, and then offer him a third toy. The wheels in his head will spin while he tries to figure out how to pick up the new toy.

Toys are fun, but he’ll learn even more by playing with you. When you’re playing with your baby, talk to him directly and use lots of important everyday words. Action songs such as “The Itsy-Bitsy Spider” are an especially good way to grab his attention and stimulate his mind.

He’ll also enjoy all sorts of copycat games. Push a button on a toy or roll a ball across the room and watch him do the same. As long as you’re playing copycat, why not sneak in a little language lesson? You might be able to get him to repeat words such as “mama” or “dada,” although it will be awhile before he treats these like real words and not just sounds.

The most important thing you can give your baby is your time. You’re a teacher, a role model, and a guide. With your help, he’ll learn a little more each day. And so will you.

University of Florida, Department of Family, Youth, and Community Sciences. How I Grow: Months Seven and Eight. http://edis.ifas.ufl.edu/fy635

Zero to Three, The American Academy of Pediatrics. Healthy Minds: Nurturing Your Child’s Development from 6 to 9 Months. http://main.zerotothree.org/site/DocServer/6-9mont…