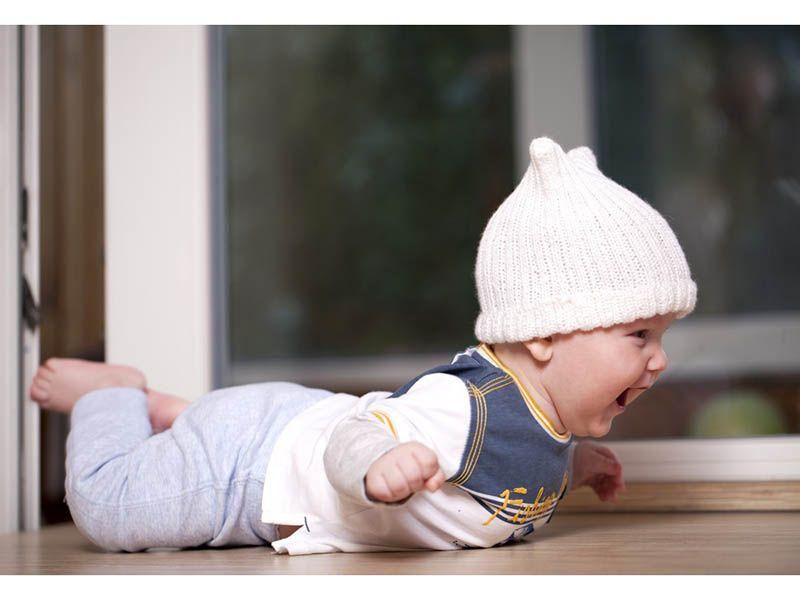 By her fifth month, your baby has already outgrown several outfits. She’s getting bigger and stronger every day, and she’ll constantly want to test her limits to see what her body can do. You can help her learn her own strength by giving her lots of different opportunities to play and move.

If you put her down on her tummy, she’ll use her arms to spin herself around like a top. She’ll also stick her arms straight out and balance on her belly, an “airplane” pose that looks great in photographs. After some airplane fun, she may try using her arms to lift her chest off the floor. These baby pushups are great exercise. She’s developing the muscles that will have her crawling around the house before you know it.

Since doctors recommend putting kids to bed on their backs to sleep in the early months to prevent Sudden Infant Death Syndrome (SIDS), giving the baby some time on the tummy at this stage is very important to help her strengthen her muscles and get ready to crawl. Babies who spend a lot of time on their backs may sometimes need some encouragement to feel comfortable exploring the world from the opposite vantage point.

Crawling is still a few months away, but she may already be on the move. While she’s lying on her tummy, she may be able to wriggle forward, especially if there’s a toy in front of her for motivation. You can help her move by pressing your hands against the soles of her feet. She’ll instinctively push off and lunge forward.

When you put her down on her back, she’ll start wiggling and kicking. You can add to the fun by grabbing her feet and helping her pedal the air. She has probably already mastered the skill of rolling over from her belly to her back, but going in the opposite direction takes extra work. While she’s lying on her back, try giving her the gentlest nudge to help her roll over. She’ll probably squeal like she’s on a merry-go-round.

If you set her on her bottom, she should be able to prop herself up with her arms. She may not be able to play with her toys from this position, but she’ll still enjoy the view. After months of being glued to the ground, sitting up must be an exciting sensation. Even if she seems to be a confident sitter, she’s bound to tip over every once in a while. Put some pillows around her to soften her landing. A little cushioning will also come in handy at mealtime. She should be able to sit up in her high chair if she has a pillow for support.

Her coordination is improving, too. For the first time, she can accurately reach out and grab things with just one hand. She still doesn’t seem too aware of her thumb, however, so she’ll trap things between her fingers and her palm. She should be giving both arms a good workout. If she reaches with the same arm every time, inform her doctor.

The technique may be crude, but she’ll manage to pick up all sorts of objects. She’ll study a toy or a measuring cup as if it were a fascinating scientific specimen. And then she’ll try to suck on it. For obvious reasons, everything within her reach should be safe, clean, and too large to fit completely in her mouth. Anything that’s smaller than 1 inches in any dimension could be a choking hazard.

You can foster both her curiosity and her coordination by putting a wide variety of safe, interesting toys within her reach. She’s learning that rattles, soft balls, wooden blocks, plush animals, and plastic cups all have different textures and, yes, tastes. Just as important, she’s learning that she has some control over her world, her body included.

Sears, William and Martha. The Baby Book: Everything You Need to Know About Your Baby. From Birth to Age Two. Little, Brown and Co.

University of Florida, Department of Family, Youth, and Community Sciences. How I grow: Months five and six. http://edis.ifas.ufl.edu/FY633