Midlife Marriage: The Crucible of Change 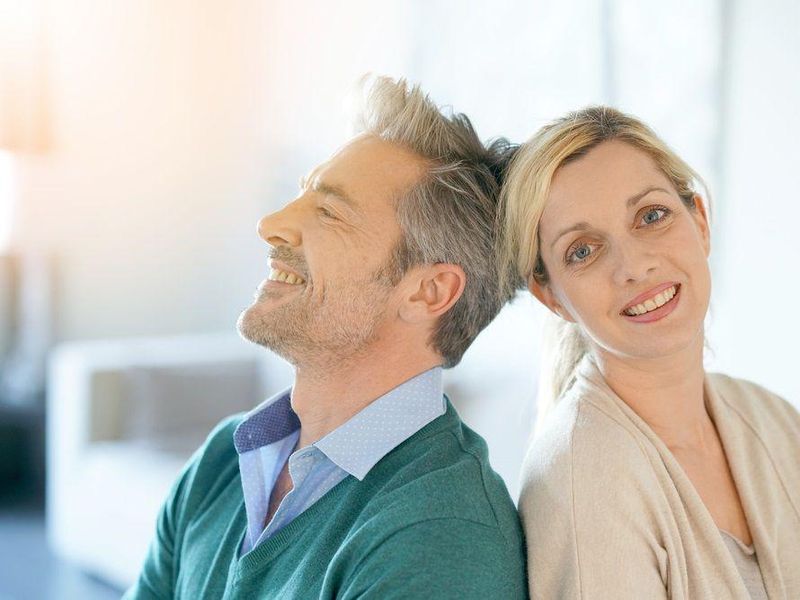 Work of the eyes is done, now

go and do heart work

on all the images imprisoned

My friend Barbara calls marriage a crucible. In her second union for eight years, she’s just come out of a difficult year in which both she and her husband were jobless and fighting constantly. She called it the time of the great questioning: Doubts, regrets, fears of aging, and painful recriminations preceded the realization that a healthy marriage grows in stages, some of them uncomfortable.

Here at midlife, I understand what she means. It used to leave me feeling dismayed, but now I see the challenges of a midlife marriage as part of the alchemy of love.

Although my husband, Michael, and I had been best friends for 25 years, we too once experienced an unsettling year that seemed to last forever, one in which for the first time we bickered, fumed, and even talked of separation. It took us by surprise; we loved each other wildly, but we were not the same people who tied the knot. We had changed, so our marriage needed to mature, too. Although we never anticipated this makeover, here we were, facing issues we thought were long resolved and others that didn’t exist until we entered our 50s.

Although there are no precise data on midlife divorce, the National Center for Health Statistics reports that the overall divorce rate for couples married 30 years or more has grown. For many baby boomers, like us, the proverbial midlife crisis is here. We are aging. Children are leaving the nest, parents are dying, and we’re careening into retirement and facing mortality. The last thing many of us expected at 50 was the need to reinvent our primary relationship as well.

Psychologist Judith Wallerstein, PhD, author of The Good Marriage and Second Chances, has done extensive research on happy marriages — ones that can survive the lure of modern divorce. In the past 20 years, she says, we have crossed a marital Rubicon. “For the first time in our history,” she says, “the decision to stay married is purely voluntary. Anyone can leave at any time. Divorce is as simple as a trip to the nearest courthouse.”

Wallerstein adds that we’ve seen a huge jump in divorce in the past decade, even among people over 60. She believes that a successful marriage requires periodic scrutiny to ensure that both partners are changing along with each life transition. This cycling can be a rude awakening at midlife, especially for those of us who thought our marital vows were as solid and enduring as our wedding rings.

Michael and I met in the 1970s at the local newspaper, where we both worked. Before I even saw his face, I had seen evidence of a kindred spirit. First it was his humor; he was the one who had stolen the “PH” letters from the sign over the photography department and brazenly placed them in front of the “ART” sign over the art department. Then it was his photography. I fell in love with an achingly tender image of a spring sparrow silhouetted in a still-leafless tree, the sun about to burst through fog like a bud straining to open. I left a thank-you note in his work mailbox.

Then we met, and my heart pounded harder every time I saw him. I was drawn to his great wit and generous heart. He found me funny and smart. We loved to joke and turned everything into play (I won the belching contests). He was four years older, but we shared the same childhood reference points, like “The Rifleman” and the moon landing. We did everything together.

We married three years later, in our mid-30s — much to the chagrin of my parents, who wanted me to wed a thin doctor, not a hefty photographer. Because Michael and I had been living together, my father didn’t speak to me for a year and refused to give me away at our wedding. So we started out fully aware of love’s evanescence. Michael never held my parents’ judgments against them, and they soon realized he was perfect for me. We four spent every summer vacation together after that.

Back then, diet and money were the only topics that generated heat. I worried about his weight and was forever trying to control what he ate. I wasn’t employed when we married; he was always generous, even though money was always tight. I tried to control that, too, and took over managing finances. Though we argued about it, we always made up.

Back to the future

Eventually Michael lost 100 pounds and I went back to work, so those particular anxieties vanished. Life moved along serenely for 10 years, until my parents unexpectedly became catastrophically ill, and I was overrun with caregiving duties. We had just bought a home in the suburbs, so money was again short. My employer begrudgingly let me travel home every few weeks to care for my folks, but on unpaid leave. Bills began to mount and Michael’s weight crept back up. I began trying to control him again, on both counts.

Michael always sent me home with unconditional support. He was the warm hearth onto which I collapsed at the end of each trip; his was the voice of compassion telling me that everything would be okay. He never flinched and he never complained. I believe that our love survived this grievous passage because we remained the best of friends, wanting only the best for each other. And he continued to make me laugh, even through tears, during the two funerals.

Unwittingly, my parents’ deaths, a month apart, caused us to lose not only our best friends, but also our only real family. We stopped traveling and sharing new experiences. I was devastated by grief and deeply regretted my one-sided decision not to have a family of my own. I channeled my torments into the field of caregiving, and devoted the next several years to freelance writing and speaking. But our isolated bedroom community made freelancing lonely, and I burned out. I was forced to quit work for a year, suffering from debilitating depression and chronic fatigue. Nothing had meaning anymore, and I enjoyed neither socializing nor intimacy. I began to prefer being alone, relying on meditation and supplements to reclaim my health.

At the same time, Michael’s newspaper merged with another, and his hours shifted to nights and weekends. That put even more stress on the marriage, to the point that I became so moody that he dreaded coming home at the end of each long commute. A month-long vacation found us bickering as we never had in 25 years. I was bored, he was weary, and we seemed to have nothing left in common.

Love in the ruins

The more I tried to control Michael, the less I trusted our love. A small grievance would become a federal offense. I hounded him to fix the running toilets, collect unpaid loans from friends, pitch in with the mountain of recycling. For the first time, we were unable to communicate. We were heading for a separation when two small but serendipitous events intervened: I decided to paint our home’s interior, and we became friends with three little girls next door. Things began to turn around.

Marriage educator and best-selling author Claudia Arp, who with her husband, David, has given hundreds of Marriage Alive educational seminars over 20 years, says that what keeps a union happy is the willingness for people to make marriage a priority and to realize there are skills they can learn.

One tool the Arps have used successfully is the idea of dating. “We’ve never met a couple on their way to divorce court “who were having much fun together,” laughs Arp. “Couples who have fun have a better chance of staying together. We found that if you put a dating spin on things, you can make anything a special day.” (At the time of this writing, Claudia and David, who are 61 and 63 respectively, had been married 41 years.)

Michael and I didn’t set a time to date, but we did rediscover our friendship — and our romance. As I prepared each room for painting, I unearthed photos from our vacations with my parents and early journals professing undying love for this beautiful man. We began talking, laughing together, and brainstorming about what we could do to have fun again. Michael joined me in hauling away unwanted clothes and books, and launched into getting rid of his own clutter of videotapes and old electronic gear. In the clearing process we found the picture of that spring sparrow, and remembered why it was we fell in love.

Since that time, we’ve made many small but important changes, all designed to create new rituals for togetherness. Rather than watching television while jostling plates in our laps, as we used to do, we eat dinner at the kitchen table and talk. He is teaching me photography. Weary of cell phones and e-mail, we share a weekly evening of music by firelight. He contributes to the household chores, and I appreciate that love doesn’t mean spending every moment together. And in the crucible we heal: We find the changes sexy and are attracted to each other in a whole new way. We look at each other with new tenderness, respect, compassion, delight.

Meanwhile, the little girls next door have pronounced us “awesome,” and taught us how to reach out again. Today we bake cakes and garden with them, and Michael mentors the oldest in photography. We have an adopted family now, but we also deeply understand and treasure the family almost lost: each other. We’ve grown up in ways we could not have imagined if we hadn’t had to save our relationship.

Faced with mortality, we know this moment is all we have. I admire Michael’s wisdom, and his new honesty in speaking his mind. Although we used to argue in unison, now we are mindful not to interrupt each other. We’ve learned to disagree about finances and health without fear that the marriage is going to fall apart. Even though we’ve grieved the loss of parents and our decision not to have children, our stronger bond now is joy. Our sparrow now hangs as the sole element on our picture wall. Poised for flight, it reminds us of the cycle of renewal after the old life has been shed.*

These second chances may well be the secret for resolving midlife marital problems: All is not lost if we are open to possibilities. Not everyone can rekindle a romance, of course, and probably not every romance probably should be. But working out conflicts doesn’t have to tear us apart. But as Wallerstein says, “Happy marriages are not carefree. There are good times and bad times; happily married husbands and wives get depressed, fight, cry and yell and get frustrated. A lasting marriage is challenged and rebuilt every day.”

* Witrogen’s husband Michael, who never smoked, has since died of lung cancer.