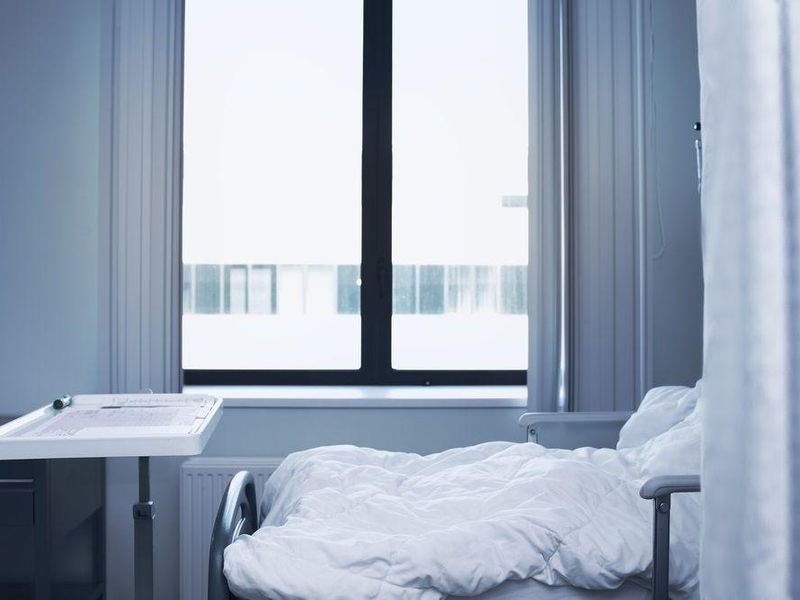 In my mother’s hospital room there was a single window, and if you stood before the window, you could see the Aerial Bridge. In Minnesota this is a famous bridge, often photographed on postcards, and around the bridge stretched Lake Superior, flat and pearled and vast as the sea. My mother told me over the telephone that she had a view of the lake. I was standing in my kitchen in California and willing my voice not to crack. “You checked into the hospital five days ago without letting any of us know,” I said carefully into the telephone. When she answered back I thought stupidly for a moment, “She is drunk in the hospital. How can she be drunk in the hospital?” “I don’t want you to come,” said my mother, thickly, making herself sound jolly. “I wouldn’t know what to do with you. I just got tired of feeling sick; my stomach hurt; I was coughing so much. The nurses are nice. I have a view of the lake.”

All of this took place in the spring, just a little while ago. I am writing about it because I want you to know what happens when someone you love dies of alcoholism.

I am not going to preach or call in the sociologists or heave around a lot of numbers and research theories and Alcoholics Anonymous advice. I did that when my mother was alive, in my own scrabbling way. And while I did it, my mother went on drinking. She drank quietly and discreetly, in the privacy of her pleasantly cluttered home. She was active in her church and traveled internationally and volunteered on committees to help the homeless and care for Latin American refugees. She read prodigiously and wrote in three languages and had friends in places like Leon, Nicaragua, and Harbin, China. You can see that she was a woman of curiosity and learning and great intelligence. She died in March, of cirrhosis of the liver, which is also what kills the men under blankets by the sewer grates.

I want you to know this, because if you are like me or like my mother, you think you know it — but you don’t, not really. You don’t know that when an educated lady in her sixties has cirrhosis of the liver, she will be lying in a hospital bed near the oncology wing and that when you get off the elevator, the nurses will come toward you quickly because they need to prepare you for what you are about to see. You don’t know that your first glimpse into the open door of the hospital room will be of skin — the skin of a leg or an arm, you can’t tell which because the skin is green and it seems impossible that this could, in fact, be human skin. There must be makeup involved or some malfunction of hospital lighting. The nurses are murmuring around you, “She looks pretty bad right now.” The body shifts position and you see that it is not bad lighting after all. This is what cirrhosis does to the human body. Before it kills you, it turns you ochre green.

I wish somebody had told my mother that before it happened to her.

She was unbearably thirsty and for the first few days, when they thought she might recover, they gave her water only in tiny sips. When my brothers and I arrived, she asked us to sneak her some water. I suppose the irony of this request was not lost on any of us because my mother had never asked us to sneak her alcohol; in our house the gin and vodka bottles were delivered by the grocery boy and left just as seamlessly in the household garbage, having been emptied in dignified fashion into large glasses with slices of lime. My mother never drove erratically or beat us with hairbrushes or acted like one of the crazy women in the movie star exposes. It was only after she went through the residential treatment program and kept drinking anyway that she began hiding the bottles, putting them under her clothes in the bottom of the suitcase when she came to visit. She never talked about it. When we tried to talk about it, she waved her hand and changed the subject. We sat moving our mouths noiselessly behind the thick glass wall that she had pulled from the air and jammed firmly into the ground between herself and the rest of us. She was able to do this because we were her children and made ourselves too small to beat it down.

In the hospital, she wore an eye patch when we arrived, but by the second day, the nurses had taken it off and we saw that one eye looked as though it had exploded from the inside. Apparently, this was not one of the things that hurt her, but a spidery web of blood had spread across the eyeball, and it was difficult to look at her face without staring at the bad eye. Her belly was swollen where the fluids were building up. Her skin was loose around her bones, crepey and soft and green. When I stroked her head, her hair seemed very shiny and black to me, and I remember thinking this was the only part of her that held what looked like life, the hair on the top of her head.

The doctor was a resident who seemed desperately young, with his unsmiling face and the circles under his eyes. He took my brothers and me into a small room with a table and told us that the alcohol had turned my mother’s liver into something like a piece of leather. He said livers are remarkably resilient and some people are able to survive with only a portion of the liver left. If they had gotten hold of my mother earlier the doctors might have been able to save her, but now her liver had ceased any function at all, and this was shutting down her kidneys and causing peritonitis, systemic collapse, cardiac exhaustion, and various other medical details I was working to follow. The resident said it would take a few days for her to die — perhaps longer — and if we were able to do it, we might wish to use this time to say goodbye in a way that felt appropriate to us. When he left the room, my brothers and I stood with our arms around each other’s shoulders and our heads pressed together, like a tripod. We had done this in the residential treatment program, which was the only other time, since we were grown, that I had seen my brothers cry.

We called her priest, who was a tough-faced Episcopalian with short black hair and a strong handshake. He told us he was a recovering alcoholic and listened to me without saying anything when I stood in the hallway and said I don’t understand. I have never understood why she couldn’t ask for help. She went into the program because she was hallucinating and as soon as she stopped hallucinating the wall came back down. “Nobody ever busted through again,” I said to the priest, and the priest said, “I know. That is how alcoholism works. The disease keeps you from naming the disease; you’re so deep inside it that you can’t pick up the telephone and pronounce the words ‘help me.'” The priest described standing in a room at a party when he was drinking and seeing that across the room was a man from Alcoholics Anonymous. The priest just went on standing there, he said, knowing he was sick, knowing this man had a kind of medicine that could help cure him, and being unable to walk toward this man and speak. “That is the disease,” the priest said. “I could not do it.”

In the afternoon we moved my mother to the hospice, where patients go to die.

There is a lot more that I could tell you. Some of it is about the passages that I understand lie before each of us and the last letting go of a hand too tired to squeeze back. Some of it is about the sound of the breath of a person whose liver is like a piece of leather. In the hospital halls it was possible to hear my mother’s breathing two rooms away; when she inhaled there was a small moan and when she exhaled there was a louder moan. I had to walk some distance down the hall, past the oncology wing, to leave the sound of the breaths. At the end of the hall was a room with a curtainless window and a wide view of the lake. That was where I was when a nurse came to tell me I needed to go to my mother’s room. When she put her hand on my elbow to steady me, I knew that my mother had died. I am telling you this because nobody told it to me — that alcohol was killing her, not in the gloomy metaphorical way that children of alcoholics talk about in their emotional deprivation groups, but precisely and literally and in such a way that for the last three days of her life she had green skin and a bloodied eye and made a terrible noise every time she breathed.

I want someone else to hear this. I want to imagine that in a pleasantly cluttered house somewhere, there is a man or woman who doesn’t know, truly doesn’t know, and could read about my mother and say, “Now I do.” My mother would have raged at me for shaming her in public, for that is how she would have thought of it; she was a proud woman, and I believe she died frightened and too ashamed to repeat aloud the name of the illness that killed her. I repeat for her now: alcoholism-induced peritonitis, followed by renal failure, followed by cardiac arrest. If one person sees these words and picks up the telephone and asks for help, my betrayal will have been worthwhile.