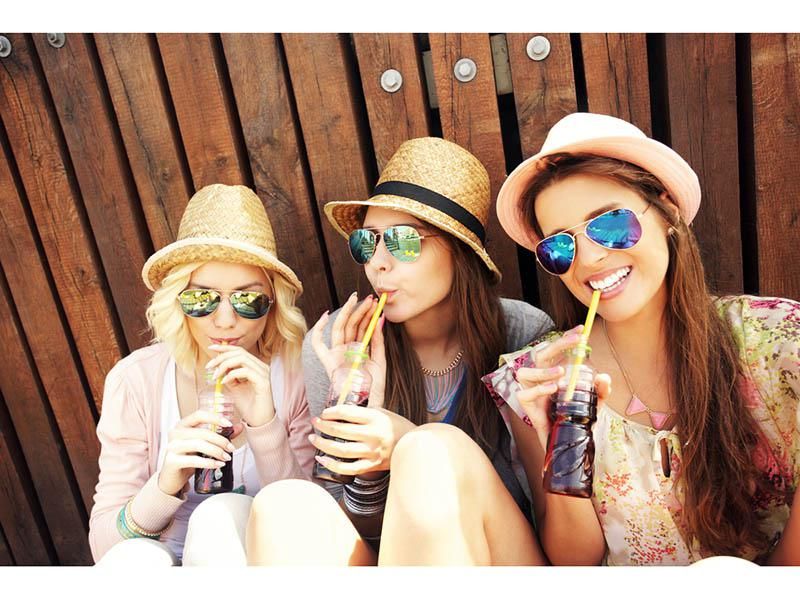 Soda addiction has long been a problem in our nation’s schools. Every day for years, many kids have lined up at vending machines to buy their 20-ounce bottles of sugar and carbonated water before they go off to study important subjects like history, math, and, yes, nutrition. Kids love soda, but they aren’t the only ones who are hooked. With few exceptions, it’s the schools that haven’t been able to give up the stuff. Coca-Cola, Pepsi, and other beverage companies have long had a multimillion-dollar grip on the country’s public schools. In exchange for installing soda machines on campus, schools have reaped huge amounts of money for athletic, music, and other programs they claim they couldn’t continue without the soda companies’ largesse.

Of course, federal guidelines introduced in early 2014 propose to phase out the marketing of soda and other sugary drinks and junk food during the academic school day. But this will take time. In the early 2000s, 60 percent of all American middle schools and high schools sold soft drinks in vending machines, according to the Journal of the American Medical Association. An estimated 240 school districts went so far as to sign exclusive contracts with beverage companies to install vending machines in their schools, and put their corporate logos on scoreboards and book covers. In return, the schools got cash — sometimes hundreds of thousands of dollars a year, or more. A survey by the California-based Public Health Institute found that some districts rake in “signing bonuses” of more than $1 million.

At a time when school districts everywhere were strapped for cash, that kind of money was nearly impossible to resist. It bought band uniforms, football helmets, computers, and new books for the library. The companies, in turn, got a chance to build brand loyalty among young customers.

But what were the kids getting?

Consider the ingredients in that 20-ounce bottle of cola: Carbonated water, natural and artificial flavors, a little caffeine, and about 17 teaspoons of sugar, which together add up to 250 calories. All of those empty calories put schools in a dilemma: They may not have wanted to give their students a sugar fix, but they didn’t want to walk away from piles of cash either.

Many administrators clearly felt that the benefits of soda contracts outweigh the risks, and in 2006 the Alliance for a Healthier Generation spearheaded an agreement with beverage groups to sell only water, juices, and non-diet soda in elementary and middle schools. At a time when 20.5 percent of children aged 12 to 19 are overweight, soda no longer seems quite so harmless. Nobody believes that soft drinks are the only cause of obesity among young people, but sugary drinks can definitely help pile on the pounds, says Melinda Sothern, Ph.D., an exercise physiologist and childhood obesity specialist from Louisiana State University. (Sothern is the co-author of Trim Kids, a weight-loss guide for overweight children and their parents.)

Sothern has found that many of the severely obese kids who visit her weight-loss clinic “drink their calories.” One 9-year-old girl who weighed over 300 pounds recently came to the clinic accompanied by her perplexed mother. The mom couldn’t understand why her daughter was so large — after all, she didn’t eat much. When questioned by the staff, the girl said she drank four or five 20-ounce sodas a day. That’s about 1,000 to 1,250 calories a day. Another mystery solved.

Of course, few children can stomach 100 ounces of soda each day, and even fewer top 300 pounds. But plenty of kids manage to drink plenty of soda. By the latest estimate, two-thirds of all girls and three-fourths of all boys have at least one soft drink each day.

In the not-too-distant past, soda was an occasional treat, something kids had when they went out for pizza with friends, says Margo Wootan, Ph.D., director of nutrition policy for the Center for Science in the Public Interest. Somewhere along the line, it became a daily indulgence. “I don’t recommend that parents never give their kids soda. But it’s not an everyday food,” she says. “Having it sold in schools makes it seem like it’s a part of everyday life.”

Now there’s strong evidence that many of those liquid calories turn to fat. In a study that was the first of its kind, Harvard researchers tracked both the weights and the soft drink consumption of 548 grade school children for two years. As reported in The Lancet, each daily serving of a sugary drink appears to raise the risk of obesity by 60 percent.

The Lancet study sounded alarm bells among nutrition experts and sparked an avalanche of news reports. It also spurred the proponents of soft drinks to action. The National Soft Drink Association, the Center for Consumer Freedom, and similar trade groups started campaigns to restore soda’s image.

Even the American Dietetic Association published a fact sheet in the early 2000s — “Straight Facts About Beverage Choices” — that cast soft drinks in an essentially positive light. About 75 percent of the text was devoted to dispelling concerns about soda, such as possible links to weight gain, cavities, and bone-thinning among children and teens.

Why would the ADA take the side of soft drinks? Were our nation’s nutritionists worried that kids weren’t getting enough sugar? Hardly. “A lot of members at the ADA were upset about that fact sheet,” Wootan says. The fine print tells the real story: “Straight Facts About Beverage Choices” was sponsored by the National Soft Drink Association.

Once again, money talked. Just as schools took cash from Coke and Pepsi to keep their library shelves stocked, “organizations need money to put out educational materials,” said JoAnn Hattner, R.D., a nutritionist with Stanford University and a spokesperson for the ADA. “In all honesty, it’s hard to find anything good to say about soda except that it tastes good.”

The sheet downplayed soda’s role in obesity and type 2 diabetes and implied that soda provides good hydration. Although soda contains phosphorous, which may undermine calcium in the bones, the fact sheet pointed out that phosphorous is also found in milk and beef. While it encourages moderate consumption, the fact sheet placed soda squarely into a healthy diet. “Regular carbonated soft drinks contain calories; milk and juice contain calories, vitamins and minerals — all beverages can have a place in a well-balanced eating pattern.”

The soft drink association went so far as to reference the ADA fact sheet in a press release claiming that soda has been “demonized” by consumer advocates — without noting that industry money paid for the information. Instead, it referred to its own advertisement as the ADA’s “official Nutrition Fact Sheet” on soda.

For its part, the dietetic association maintained it has a strict editorial policy free of industry influence, and soon after the fact sheet’s publication, it was removed from the ADA’s online materials.

Standing up to Big Soda

It remains to be seen how the soda ban will play out and what will happen in the nation’s high schools. In the best-case scenario, beverage companies will still offer lucrative contracts to sell their particular brands of healthy drinks, and kids will spend just as much money on juice, water, and milk as they used to spend on sodas. The school districts “are gambling that they won’t lose much money, and they’re probably right,” Purcell says.

At some point, every school district has to take a good look at its priorities, says Karen Cullen, a pediatrician and nutritionist with Baylor College of Medicine. “It all comes down to how you perceive a school — is it a healthy environment or not?” Parents, teachers, and others who care about children should take a close look at what’s happening at their local schools, she says. When concerned citizens speak loudly enough, they can wield more influence than soda companies can ever hope to buy.

Parents who want to take a stand against soda should start at home, Sothern says. They shouldn’t try to ban soda outright, but they should set limits. One 12-ounce can of soda each day should be the absolute maximum, she says, and children with weight problems should have even less. Gradually, over time, parents can substitute healthier drinks so that soda again recedes to its earlier status as an occasional treat.

Fortunately, even the most dedicated soda drinkers can be persuaded to cut back, Sothern says. In fact, she’s found that it’s often the simplest way for overweight kids to slim down. The 300-pound girl lost nine pounds in several weeks simply by switching from soda to water and milk.

Even a small change can make a difference, according to recent research. A study of 650 English schoolchildren reported in the British Medical Journal found that obesity decreased by 0.2 percent among children who cut their soda intake by just half a glass per day. A control group of children who slightly increased their daily soda consumption experienced a 7.6 increase in obesity.

Kids can kick the soda habit. Whether high schools have the same willpower remains to be seen.

Interview with JoAnn Hattner, R.D., nutritionist and spokesperson for the American Dietary Association

Interview with Margo Wootan, Ph.D., director of nutrition policy for the Center for Science in the Public Interest

Fried EJ and M Nestle. The growing political movement against soft drinks in schools. Journal of the American Medical Association 288(17): 2181.

Liquid Candy. Center for Science in the Public Interest.

Centers for Disease Control and Prevention. Prevalence of Childhood Obesity in the United States, 2011-2014.