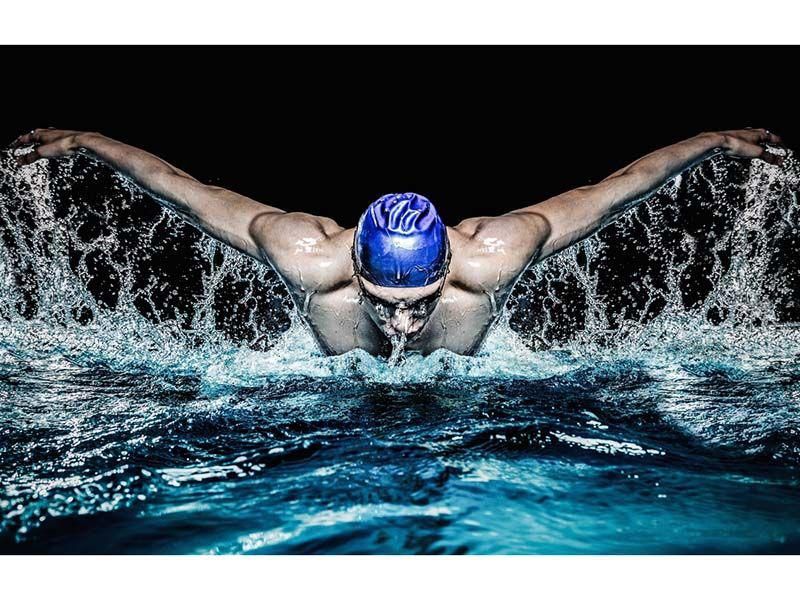 If it weren’t for asthma, some of America’s most talented swimmers might never have stood on the awards platform in Sydney, Australia in 2000, collecting a record number of medals. There’s a good reason: Many U.S. swim stars, including Misty Hyman, Amy Van Dyken, Dara Torres, Tom Malchow, and Tom Dolan, were diagnosed with asthma and allergies as youngsters and urged to swim by their physicians.

Of the 48 members on the 2000 Olympic swim team, at least seven need their inhalers all the time, whether they’re swimming or not, says team physician and pediatrics sports medicine specialist Paul Stricker of the Scripps Clinic in La Jolla, California. Another eight or so use inhalers mainly when they exercise. Those who need inhalers all the time wheeze not only when they exercise (called exercise-induced asthma), but also when they encounter allergens around them, like pets, grass, pollen, pollutants, chemicals, and dry cold weather.

“It’s amazing how their bodies have learned to accommodate asthma,” says Stricker, who has worked with the swim team for 12 years. “Even though they have trouble with the condition, their lung capacities are so increased that we can’t even do some of the normal lung capacity tests on them; they’re off the scale.”

Still, it takes some experimentation and time to find the right medications for an asthmatic — Olympian or otherwise — to feel comfortable.

“With its warm, humid environment, the swimming pool has always been a place where doctors steered kids with asthma,” Stricker says. “[The sport] has fewer triggers and it develops their aerobic capacity, allowing them to overcome a deficit they may have had in other sports.” On the negative side, he notes, chemicals in the enclosed area can be hard on an asthmatic.

“If a child wants to be involved in sports, it’s clear you can set world records and win medals, even if you have asthma. It shouldn’t be viewed as a handicap that prevents a kid from participating. Cross-country running or figure skating might be more difficult because of the cold, dry environment, but if you have the disease under control with inhalers, the medicine should allow you to compete normally.”

Hyman placed first in the grueling 200-meter butterfly, beating world record holder Susie O’Neill of Australia. But Hyman wasn’t tempted by fame from her win. In fact, she turned down a number of endorsement offers in order to remain an amateur until after graduation and continue her college swim career.

Van Dyken, 27, won two gold medals in Sydney on relay teams. Four years earlier at the Atlanta Olympics, she earned individual gold medals in the 50-meter freestyle and 100-meter butterfly, as well as two team gold medals in a relay.

In 2014, Amy Van Dyken-Rouen — following her marriage to former Broncos punter Tom Rouen was paralyzed from the waist down in an all-terrain vehicle accident. Since then she has founded Amy’s Army, a spinal cord injury foundation, and travels the country bringing awareness to spinal cord injuries. The interviews with both women were conducted before Van Dyken’s accident.

When did you start swimming and why?

Hyman:I started at age 5 because the doctors said it would be a good thing. I was allergic to everything and still am — I was really a weakling. The doctor said that the moisture and learning to hold my breath would be good for my lungs. I have asthma (induced by exercise, infection, and allergies), and I’m allergic to dust, pollen, smoke, animals, trees, dairy, and wheat.

Van Dyken: I started swimming when I was 6 and did it on a doctor’s recommendation. I wanted to be normal and walk up and down the stairs by myself. I have exercise-, infection-, and allergy-induced asthma, and I’m allergic to anything that lives or breathes, could live or breathe, or did live or breathe. When I first started swimming, I was terrible, but I was with my friends. It was a great thing for me to get into.

How has asthma affected your swimming?

Hyman: I struggled with it a lot before the Olympics. I developed a sinus infection during the spring before, and had to cut back on practice, which made me really nervous. I was a lot more tired and was having trouble completing workouts and not recovering as well as I should have been. I kept cutting back because I thought I was burned out.

Finally, I went home to Phoenix and my mom said I didn’t sound well. I went to the doctor who told me that I’d lost a quarter of my lung capacity because of the infection. It was great finding out what was wrong so I could address it. We treated it with antibiotics all summer and several inhalers, and I was on antibiotics and the inhalers through the Olympics.

Before that, there were times when I’d get bad bronchitis or a sinus infection that went to my lungs after I swam hard. I remember days sitting in the doctor’s office when I should have been in the hospital, but we had to be careful with what I took to make sure it was legal. It’s important to keep the sport as clean as possible, but when you can’t breathe and are really sick it’s sometimes hard to find things that aren’t banned.

Van Dyken: Before I got my asthma under control with the right medicines — at age 23 — I was rushed to the hospital monthly. Finally I switched medicines and started sleeping through the night. I also got a peak flow meter (to measure lung capacity). If I was in the green, I’d go all out and do a normal swim practice. If I was in the yellow, I’d warm up really slowly, then see if it was in the green. If it was still in the yellow, the workout would be less intense. If I got to the pool and was in the red, I wouldn’t even set foot in the water.

Do you consider asthma to be an obstacle?

Hyman: Especially (in 2000) it was something to overcome. But when I was able to treat it, it was like I had gills. In general, it’s been more of a challenge than anything else. I don’t think of it as something I make a big deal out of, or that makes me different from anyone else. Mostly it’s inspired me to overcome it. I may tell my coach on certain days that my asthma’s bothering me or I’m not breathing so well — it’s another training variable.

Van Dyken: I’ve never thought of it as an obstacle. I’ve thought of it as something I had that wouldn’t go away and it’s actually made me stronger. A lot of people didn’t think I’d make it to the Olympics. Being the stubborn person I am, I wanted to show them I could. Six golds in two Olympics — that’s not bad for someone who wasn’t supposed to be able to swim well.

Considering you scored a stunning upset in Sidney, Misty, were you surprised by the results?

Hyman: I knew I had the potential for a race like that. I’d been training and focusing on this one event for the last four years. All the pieces were there; it was just a matter of putting it together and executing the right race strategy. I was so pleased to put it together at that moment.

I was nervous that whole day of the race — I looked down at my hands and they were shaking. I hardly remember warming up after I got to the pool. I went into the ready room (where the swimmers wait to be called on deck) and decided to just be in the moment. I wasn’t thinking about the fact it was the Olympics, or that Susie O’Neill (the world champion) was next to me. I just executed what I knew I could do and didn’t worry about the results. When I made that last turn I knew I’d make it — I was in control.

What have you done since the Olympics?

Hyman: I was offered some contracts — the Wheaties box, swimsuit endorsements, and other stuff — but I decided to keep my college eligibility. I did a lot of research and talked to friends and others and decided that the best thing for me was to swim my senior year at Stanford and enjoy swimming.

I’m glad I did, because when I went home for two weeks, I had the opportunity to share the experience. I went to my elementary, middle, and high schools and passed around the gold medal to the kids. I told them that it takes a lot of hard work but it’s worth it, and that they should work hard if they believe in something. It was very fulfilling.

The gold medal has a lot of nicks and scratches from passing it around but the look on kids’ faces when I put it around their necks and when they said they want to be like me, well, I felt very flattered and honored to be a role model.

I plan to stay in the sport for another four years and compete in Athens. If things are going well I might travel and do the World Cup swim circuit; then I can make money doing what I love. I’ll also keep speaking to kids to raise money for charities. Then I’m thinking about going to law or business school after 2004. (Hyman donates swim caps and suits to several organizations that auction them off and gives the proceeds to underprivileged youth.)

Van Dyken: I’ve retired from swimming! It was a wonderful career. For 21 years my whole life was so structured. But I still need goals, so I’ve decided to become a triathlete. I’m training two hours a day and have lost 25 pounds from cutting back on the heavy weight training for swimming. I started training two days after the Olympics ended.

I also talk to physicians and visit schools, swim teams, and kids in the hospital as part of the Asthma All Stars with (track star) Jackie Joyner-Kersee and (pro football player) Jerome Bettis. With the three of us, we can say, “We’ve got asthma, and we think we’re pretty cool!” I also tell the kids that when I was growing up I thought I was the only person that had asthma, but I really wasn’t and they aren’t either.

I was in a hospital recently talking to a 14-year-old named Tom. He asked me for my autograph, and I asked him how long he’d had asthma. He told me he found out five minutes ago, and that he felt his life was over — he thought he wouldn’t be cool and wouldn’t get girls. I told him that he’d get the right medicine, and it would be under control.

We also tell physicians how children are feeling and why certain medicines may not be great for them. I’ve gotten a lot of positive response. Kids feel intimidated telling their physicians when they don’t like their medicine. I did, and that’s why I feel so strongly about telling them not to be afraid to talk to their doctor. It took me 23 years to figure that out.

Asthma and Allergy Foundation of America (AAFA)
Founded in 1953, it has a network of 12 chapters and organizes educational support groups. The foundation also provides community-based programs and raises funds for asthma care and research.
http://www.aafa.org