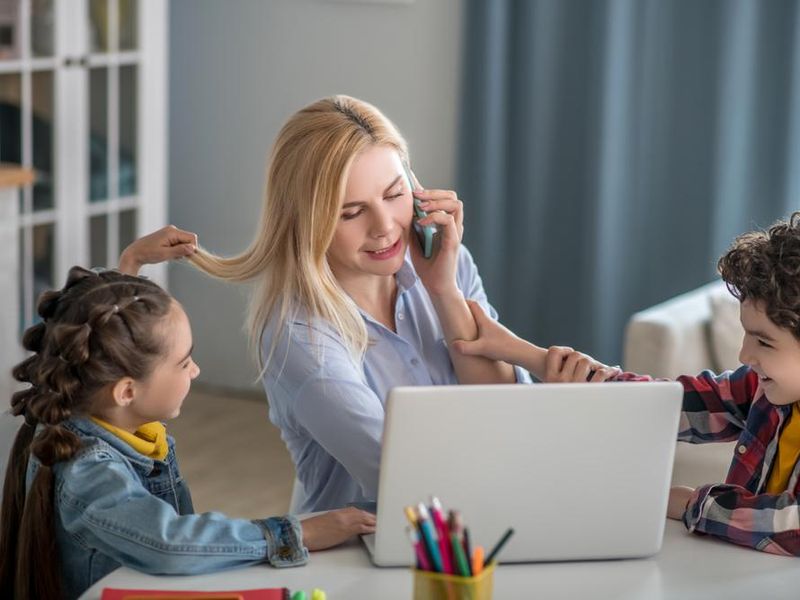 Why does my child interrupt all the time?

Interrupting comes naturally to children because they tend to forget that other people have needs that are as important (or almost, at least) as theirs. Even if your child knows that she’s supposed to wait for a pause in the conversation and say, “Excuse me,” the protocol slips her mind because what she has to say feels so urgent at that moment.

Or, your child may be interrupting because she needs your undivided attention. Try putting your cell phone away and giving your child your uninterrupted attention when she wants to talk, during family meals and if it looks like she has something on her mind. Said MIT social scientist Sherry Turkle about parents who are glued to their cell phones: “I see so many children who are craving, just craving their parent’s undivided attention, and they are just not getting it.”

Your child may be especially prone to interrupting if yours is a talkative family or if she often hears you and your spouse or other adult relatives finishing each other’s sentences. You’ve probably already talked with her about when she should interrupt (the house is on fire) and when she shouldn’t (she’s bored). She probably also knows (even if she doesn’t always remember) that the appropriate way to preface a necessary interruption is to quietly say, “Excuse me.” But putting these principles into practice is much harder than merely comprehending them, especially for high-energy kids.

How should I teach my child not to interrupt?

It may be tempting to draw a hard line — to refuse to acknowledge an interruption until your child says, “Excuse me,” in an appropriate tone. But inflexibility may get you and your child into a stalemate. Instead, respond consistently with gentle reminders, and heap on the praise when she remembers what to do. If you’re patient and steady, she will eventually learn.

When embarking on an anti-interruption campaign, set reasonable goals for your child. A 6- or 7-year-old probably can’t hold her thought for more than a couple of minutes. Ask her to help you designate some signals — setting your hand on her head means “I see that you need me,” two raised fingers mean “I’ll be with you in two minutes” (start with one and gradually lengthen her waiting period), and raised eyebrows mean “What do you say?” Use these as consistently as possible, reminding her when she forgets the rules and praising her when she remembers. Positive reinforcement is as important as negative reinforcement: If she starts jumping up and down and screaming, it’s time for a talk about waiting, but if she manages to stand there patiently for the two minutes you signaled, she deserves a “Thank you for waiting so nicely!”

Your child will be more inclined to follow a plan that she helped you devise. Pick a quiet time to talk with her — neither right before you need to make an important call nor right after you cut a call short because she wouldn’t stop pestering you. You might start by saying, “I’ve noticed that you often think you need me when I’m on the phone.” This will allow you to get into the general topic of what a conversation is and why it shouldn’t be interrupted unnecessarily. Ask her to help you compose a list of good and bad reasons to break in, perhaps starting with the question “If you were playing an exciting game, when would you want me to interrupt you?”

Next, the two of you can brainstorm about what she might do to keep herself busy while you’re talking. For instance, she could keep a shoe box full of paper dolls, blocks, or puzzles that she gets out only when you’re on the phone. And don’t forget to take note of patterns: If she routinely interrupts you because she’s hungry or thirsty, for example, you can designate a low kitchen shelf where you’ll keep mutually acceptable snacks or juice boxes; tell her she can get one out herself whenever you’re using the phone.

For a while you’ll probably need to reinforce the new arrangement by helping your child remember your discussion. This is easier to do when you’re the one making the phone call, but you can quickly remind her about her box of special toys when you hear the phone ring. When you have to make a call, head trouble off by saying that you’re about to call someone and that you expect to be on the phone for 15 minutes. Ask your child, “Is there anything you need before I get busy? How will you keep yourself occupied so you won’t interrupt me?” Some parents set a timer, explaining that they’ll be available when it goes off, or give their kids an opportunity to practice telling the time (“When the big hand gets to the three, I’ll be finished”). But these techniques work only if you know how long your call will last.

How can I keep my child from interrupting her sibling?

Deciding whether and when to protect one child from another — especially a quieter or younger child from an older or more outgoing sibling — is always difficult. True, you won’t always be there and your less assertive child will have to look out for himself someday. But when your kids are still quite young, a little mediation is a good thing, particularly if the talkative child is several years older (or several decibels louder). If she cuts her brother off repeatedly, you probably want to talk with her in private. Ask her whether she’s aware that she does this, and tell her to listen for a moment before she begins to speak, to check if the airspace is free. Make sure she understands, too, that it’s no more acceptable to interrupt a family member than anyone else — that good manners are for our nearest and dearest, not just for company.

Often the solution is as simple as giving each child some time alone with you, so they don’t always have to compete for attention. If you have a partner, occasionally separate the kids for special parent-and-child activities or switch off at bedtime so they each get stories and quiet conversation with just one of you. If you’re on your own, take turns setting each child up with an engaging activity while you give the other some undivided attention.

Kids also benefit from learning the art of group conversation, and incorporating a little structure into dinnertime discourse can help them get the idea. You might have each person relate, without interruptions, one good thing and one bad thing that happened that day. If your chatterbox intrudes anyway, stop her gently (and quietly, so you don’t get into a louder-and-louder pattern), saying, “Your brother was talking, honey. Let him finish, and then it’ll be your turn. Max, you were just telling us about the dog you saw today.” You’ll probably tire of your role as moderator before they truly get the hang of conversational give-and-take, but doing this exercise once a week — or even once in a while — will give your kids valuable practice.

How do I explain to my child that I need to finish something?

Teaching kids to respect other people’s activities is as important as teaching them to be considerate of others’ conversations. Set limits courteously and consistently; you might say something like, “I’m busy rolling out cookie dough right now, but I’ll help you set up the dominoes when I’m finished.” It’s a good idea to clearly state how long you expect to be: “I need 10 more minutes on the computer to finish this letter, and then we can work on your math problem.” Such explanations keep your child from thinking it’ll be “a million years” before you get around to helping her.

Children also generally find it easier to wait if they understand why. You might briefly explain, “I need to get dinner into the oven, so that we can eat and not be late for your concert. As soon as I’m done, we can braid your hair.”

While it’s important that your child learn to respect your work and commitments, you don’t want to be rigid when she interrupts because she feels her need is urgent — even if it really isn’t. Check the emotional temperature of the moment before you respond. If she’s in a snit because she was trying to do something on her own and having a hard time, she’ll appreciate your empathy — ” I know it’s frustrating to try something several times without getting it to work. Why don’t you take a break and bring us both a cold soda? As soon as I get to a stopping point, we’ll take a look together.”

As she gets older, you and your child can figure out together what situations justify an intrusion on your work or pastimes. For example, you might agree that she can interrupt you when she has big news (good or bad) or needs your help immediately. Otherwise, she should quietly say that she’d like to talk to you and ask how long you’ll be. Then she should do something by herself in another room — not hover nearby — for the period of time you name.

Kid Cooperation: How to Stop Yelling, Nagging and Pleading and Get Kids to Cooperate, Elizabeth Pantley, New Harbinger Publications

The Discipline Book: How to Have a Better-Behaved Child From Birth to Age Ten, William Sears, Little Brown & Co.