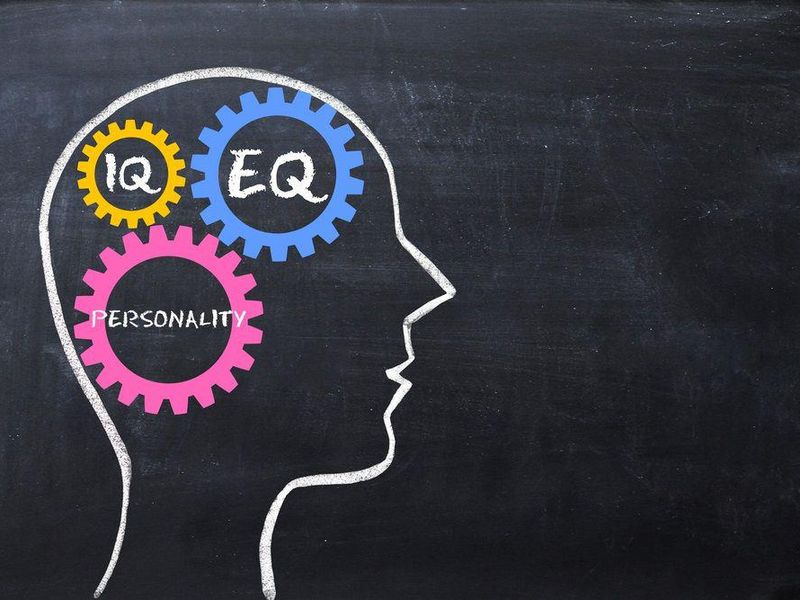 What is emotional intelligence?

Emotional intelligence is the ability to cope with your own feelings as well as those of others. Self-control, zeal and persistence, compassion, and the ability to get along with people are the qualities that make someone emotionally intelligent, according to Daniel Goleman, a psychologist who popularized the term in his book “Emotional Intelligence: Why It Can Matter More Than IQ.” Unlike self-help books, which tend to focus on improving attitude, “Emotional Intelligence” plumbs the psyche, drawing from neuroscience and the latest brain research on “two minds,” the rational and the emotional.

There’s no direct relationship, says Goleman, who reported for years on behavioral science for The New York Times and now runs his own consulting service in Sudbury, Massachusetts. But he and other researchers believe that high levels of EI can help explain why some people with lower IQs are more successful in work and their personal lives than people with significantly higher IQs. In other words, being book-smart won’t do you much good if you don’t understand your own feelings and can’t relate well to other people.

Some scientists have argued that everyone is born with a set IQ that cannot be significantly changed by education or life experience. According to this theory, destiny in life is largely fixed by genetic aptitude. Goleman is more optimistic about emotional intelligence, declaring that adults can improve their emotional skills. Perhaps more important, children can learn them.

What qualities make someone emotionally intelligent?

This type of wisdom is founded on five basic abilities:

You have to be aware of your own emotions and able to recognize what you’re feeling at a given time.

You must be able to manage those emotions and how you act on them.

You should know how to motivate yourself and persist in the face of obstacles.

You need to be able to recognize and understand other people’s feelings (you must have empathy).

You have to be able to build and maintain healthy relationships on the job and with friends, partners, and family members.

How can I improve my emotional intelligence?

Goleman says there are four ways:

Learn to recognize your own feelings by taking a step back from them: Observe an emotion and the reaction it produces within you.

Practice naming your emotions and identifying their real causes. (Anger, for example, may spring from jealousy or insecurity.) Some people find that writing down their deepest feelings in a journal helps them identify what’s really going on inside.

Work on managing your feelings to avoid violent or destructive outbursts. It’s also important to know which feelings are appropriate to express in a particular situation. The idea is not to suppress your emotions, but rather to be able to keep your feelings in perspective and avoid being hijacked by them. (If you have a generally negative outlook, you might want to read psychologist Martin Seligman’s book “Learned Optimism.” It offers valuable advice on developing genuine-not Pollyannaish-optimism, which can change the way you deal with the inevitable setbacks and obstacles).

Realize that communication involves a lot more than what is said.

Empathy, or understanding what other people are feeling, can be developed through listening carefully and observing people’s body language and facial expressions. To become a better listener, Goleman suggests you adopt a learning partner and practice listening to each other, then rephrasing what you hear and repeating that to your partner until you get it right. The idea is to hear the feelings behind the words.

Deepen your connections to other people. Successful relationships depend on many skills, including the capacity to empathize, the ability to talk about your feelings, the patience to listen, and the ability to calm yourself down before discussing a problem with someone.

Can emotional intelligence help my marriage?

Definitely. In marriages and other committed relationships, Goleman says, the major stumbling blocks are somewhat different for men and women. In general, men need to avoid sidestepping conflict and to understand that their partner’s expression of a grievance may be a loving attempt to improve the relationship rather than a personal attack. Women need to learn how to voice their complaints more objectively, without criticizing their partner’s character, concentrating instead on the action that has upset them.

When is the best time to learn these emotional skills?

Like many skills, a facility with emotions is fostered most easily during childhood. Goleman believes that teaching emotional skills in schools would give children an enormous advantage as they go through life. Moreover, he argues, violence in today’s society comes at least in part from people acting on impulse after being hijacked by their emotions. Teaching self-restraint and compassion along with math and history could go a long way toward combating society’s ills.

Daniel Goleman. Emotional Intelligence: Why It Can Matter More Than IQ. Bantam Books