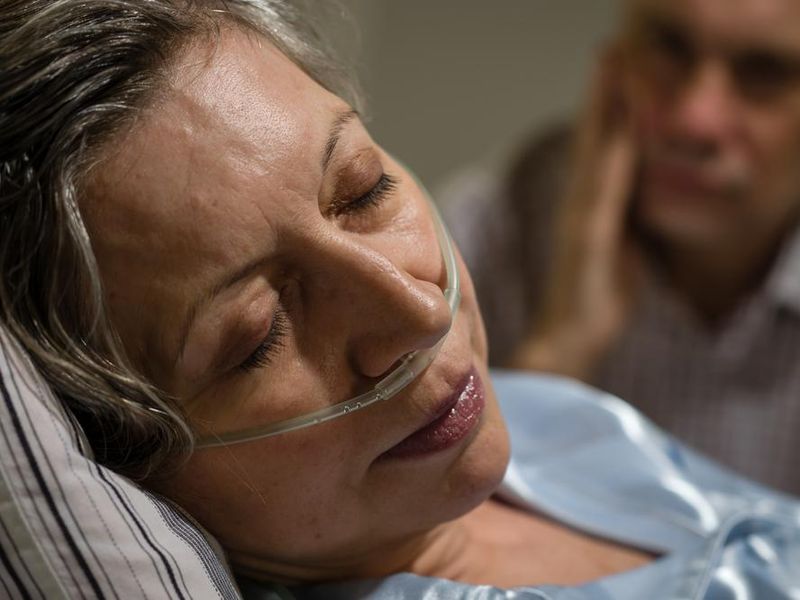 Mother Teresa reportedly once said that no one should die away from the sight of a loving face, and today’s hospices strive to fulfill that wish. Hospice is care for people who are dying and is usually administered at their homes. Such an approach is more attuned to the physical, spiritual, and emotional needs of patients and their families, advocates say. The primary goal of hospice is to comfort the dying, and most people feel far more at ease spending their last days at home rather than in an institution. It’s also by far less expensive than hospital treatment.

“People who are dying are given back some of the control over how they conduct their lives,” said Connie Borden, former executive director of Hospice by the Bay in San Francisco and now palliative care program coordinator of St. Mary’s Medical Center.

At home, Borden says, people don’t have to adhere to a hospital’s schedule, menu or dress code. Instead of being roused for breakfast at 7 a.m. because that’s when the ward eats, a patient at home can sleep and eat when it suits her. At home, she doesn’t have to argue with a roommate over control of the TV remote or listen to someone else’s visitors. And most people feel more relaxed in their own beds, surrounded by loved ones and familiar possessions. Families are drawn to hospice because for all the marvels in their little black bags, many in the medical establishment don’t know how to deal with the needs of the dying, say hospice officials. “Hospitals see death as failure,” said Jeremy Hollinger, manager and bereavement coordinator for Coming Home Hospice in San Francisco. “In hospice, death is seen as part of a natural progression.”

While hospitals are focused on making people well, hospice acknowledges that death is near. It helps people do what they can to be as comfortable and prepared as possible. This includes greater access to painkillers that might be addictive in someone not facing death.

“Most of what we are doing in end-of-life care is not included in medical school or nursing school,” Borden said. “In hospice, it is appropriate to give much higher levels of morphine. In the hospital, the focus is on treating the disease. The first question we ask is, ‘Are you in pain?'”

By shifting attention from the illness to the person, hospice is able to meet a wider range of concerns, Borden added. “We take a more holistic approach to care — we look at emotional and physical elements,” he said. “We have chaplains available to talk about spiritual questions that are not necessarily religion-based — things like, ‘Why am I here? What did I contribute?'”

According to the National Hospice and Palliative Care Organization, the number of Americans receiving hospice care is growing every year. Hospice is, in fact, covered under Medicare, Medicaid, and by HMOs. Most private insurance carriers also cover this type of care, and many hospices are committed to serving people whether or not they are insured.

When physicians prescribe hospice care, Borden says, they usually certify the person has six months or less to live. There is no limit, however, to hospice care services as long as the patient continues to meet eligibility requirements.

While hospice is available 24 hours a day, seven days a week, most hospice arrangements assume that family members will be the primary on-site caregivers. “Our unit of care is the patient and the family,” Borden said. “Our interventions for the family are just as important.”

A hospice team usually includes a registered nurse, home health aides, a medical director, a social worker, and a chaplain. They work together to supplement the care the patient’s relatives and friends are able to provide. The social worker can get the patient and the family started on funeral plans. Home health aides can help lift and change the patient, fix simple meals, or give relatives a couple hours of respite.

If you remember the television series ER, you may recall the episode in which Dr. Mark Green set up a hospital bed in his living room and hired a visiting nurse to help him care for his elderly father during his final days with emphysema. This is how hospice usually works (although the person being cared for usually has their own bedroom). Although the first modern hospices were established in the late 1960s in England as institutions for people preparing for death, in this country people usually receive hospice care in their own home.

Since people with AIDS are staying healthy longer and have less need for hospice care, the average age of hospice patients is increasing. “Our typical client is a 74-year-old man with lung cancer,” said Borden. Although her agency sends teams of social workers and medical professionals into several 5- to 15-bed hospices in San Francisco, Borden said about 80 percent of their cases are in private homes and nursing homes.

“Residential care is very expensive, once you factor in things like laundry, licensing, meeting various codes,” Hollinger said. “And the focus in this country for the past 20 years has been to keep people out of institutions.”

“I wouldn’t have slept at night”

During the final weeks of her mother’s life, hospice was Karen Carlton’s salvation. Dolly Carlton, 69, needed around-the-clock care, but Karen couldn’t move her mother into her San Francisco studio apartment. After spending several weeks on the phone looking for a place to transfer Dolly, who was dying of breast cancer, Karen finally got her a room in a nursing home — which made both mother and daughter miserable.

“She’d been a very independent woman, and she was not happy when she was in the hospital,” Karen said. “I was visiting her five times a day. I wore myself out. I was very frustrated.”

Relief for both of them came in the form of a team from Hospice by the Bay. While Karen was at work, different members of the team spent four hours a day at the nursing home with Dolly. “They were the most compassionate people I’ve ever met,” Karen said. “They treated her as if she was their mother. They were there every day and they made her feel good.”

Karen said the hospice team gave her mother the care and attention the nurses didn’t have time to offer. They cleaned her and dressed her in the flannel pajamas Karen brought for her. They even got her two wool beanies to cover her bald head.

Karen also felt that the presence of the hospice team improved the level of attention her mother received from the nursing home staff. “I don’t think my mother would have gotten the appropriate care and medication without them. They were my eyes and ears.”

The hospice social worker acted as Dolly’s advocate, interpreting between the family and the doctor and nurses. “I was so frazzled,” Karen said. “It was nice to have someone speak for us who knew what the doctors were talking about and who knew what to ask and what to say.”

Part of hospice includes helping the patient and the family to prepare for the powerful emotions that attend impending death. “They talked to my mom about death. I didn’t feel comfortable talking about it, and they respected my feelings, too,” said Karen.

“We all had a good rapport. You’re in a depressing situation to start with. It helped so much to have someone to talk to, someone on her side. They took some of the weight off of me so that I could have that quality time with my mother. If it hadn’t been for them, I wouldn’t have been able to sleep at night.”

Most of all, Karen said, the hospice team made Dolly feel like she mattered. In the hours she might have spent alone in a bed in a nursing home, the team was good company for Dolly. “It wasn’t like a doctor-patient or nurse-patient relationship,” Karen said. “It was like a loving friend relationship.”