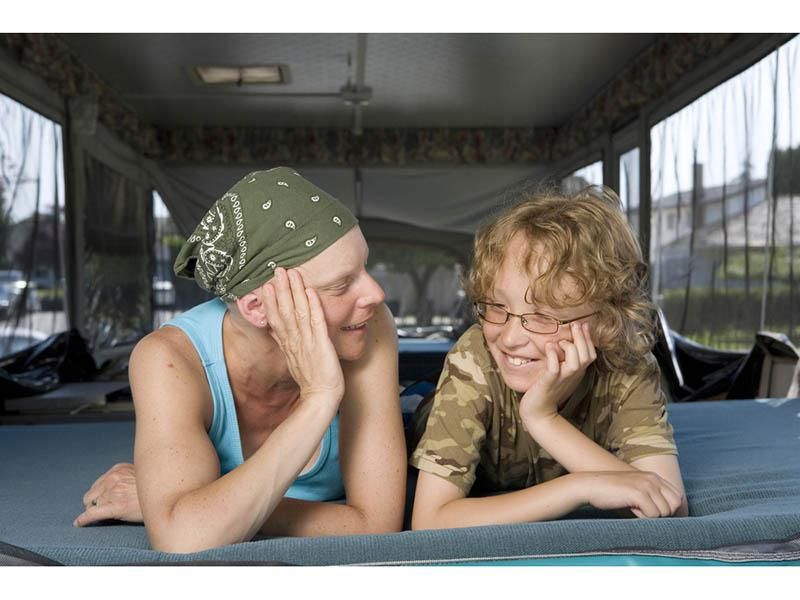 How are drugs used to fight breast cancer?

Doctors use certain medications to help prevent breast cancer or, in combination with other therapies, to fight it and treat it. The kinds of drugs you’ll take depend on what stage your cancer has reached, whether it responds to hormones like estrogen, whether you’re resistant to any medications or treatments, and how well you tolerate the ones prescribed. Chemotherapy is the traditional standard, but several newer drug treatments may also be helpful.

Chemotherapy is a treatment that uses drugs to combat cancer by killing all fast-growing cells, not only cancer cells but also those in your hair follicles and immune system. A combination of more than one drug is usually more effective than any single one. Your overall health is also important in determining what type of chemotherapy is best for you. The medications may be taken in pill form or through an IV (a tube inserted into a vein). An IV treatment, which lasts about two hours, often includes anti-nausea medications along with the chemo drugs. The treatment is painless, and you can usually relax in a reclining chair and read or chat while receiving it.

A typical course of chemotherapy might involve treatments every two to three weeks (to allow time for recovery in between) for three to six months, depending on the stage of your cancer and the other treatments you’re receiving. Advanced breast cancer treatment may last longer. Chemo may also be used before surgery. This is called neoadjuvant chemotherapy and is used to shrink a large tumor that otherwise cannot be removed completely by surgery. It’s also used to shrink large tumors so they can be removed by lumpectomy rather than mastectomy.

What are the side effects?

Chemotherapy is well-known for causing nausea and vomiting. Some cancer patients even start to experience anticipatory nausea before their chemo appointments. But these side effects can be treated, and sometimes they can be prevented entirely. Today’s anti-nausea medications are more sophisticated and effective than those used even a few years ago: They can sometimes make you feel better and boost your appetite. Let your doctor know if you continue to feel nauseated; there are new drugs that can help control this even in highly sensitive patients. Discuss other things you can do to get relief as well, such as eating frequent, small, non-spicy meals, learning and practicing self-hypnosis, and having a few crackers every time you wake from sleep.

The most serious side effect of chemotherapy is suppression of your immune system, which can greatly increase the risk of serious infection. Chemo lowers your levels of red and white blood cells and platelets, an effect that’s likely to make you tired and lower your immunity. It’s very important to wash your hands carefully and often and, if possible, avoid being around sick people while you’re undergoing chemo. You may be given drugs called colony-stimulating factors, which can improve your white blood-cell count and thus give you more energy. The exhaustion and nausea are at their worst shortly after you have a treatment, but within a day or so the nausea will often subside; it’s the ever-present fatigue that many women find most debilitating.

Taking daily walks, getting lots of rest and frequent naps, and avoiding stress and unnecessary chores can help you cope. “There are many things that can be done to counter cancer-related fatigue, starting with a search for treatable physical factors, like low thyroid or blood count, and learning to recognize and respect one’s limits,” writes Dr. Wendy S. Harpman, the author of After Cancer: A Guide to Your New Life. “Many patients try to keep life as normal as possible, and in the process, they overdo it.”

Other common side effects of chemotherapy are hair loss, sores in the mouth, changes in the skin, and menstrual irregularities. Whether you have these problems may depend on which drugs you’re given or the dosage and length of treatment.

Some of the most common chemo drugs often used in combination are Cytoxan (cyclophosphamide), epirubicin (Ellence), methotrexate (Rheumatrex), 5-fluorouracil (Adrucil), doxorubicin (Adriamycin), paclitaxel (Taxol), docetaxel (Taxotere), and trastuzumab (Herceptin). All patients receiving Adriamycin-based therapy should have a special heart evaluation called a MUGA scan before starting therapy to assess for underlying heart disease. High doses of Adriamycin can cause heart damage, so the dosage must be carefully monitored by your doctor. All regimens containing Herceptin also require heart monitoring when you begin (to get a baseline) and at months 3, 6, and 9.

Generally, Adriamycin-based regimens cause temporary hair loss, which can occur not only on your head, but on other parts of your body. Other regimens can cause hair loss, too, but not always. Many women cut their hair short or buy a wig before starting chemo to help them cope with losing their hair.

Other serious side effects are possible but rare. For example, some women experience premature menopause or, more rarely, develop acute myeloid leukemia. Chemotherapy may infrequently lead to kidney or bladder problems, too. Some drugs can cause peripheral neuropathy, a nerve-related condition that may make your hands or feet feel tingly, weak, or numb. Consult with your oncologist if you develop any of these symptoms.

What can hormone therapy do?

The female hormone estrogen promotes the growth of about two-thirds of all breast cancers. Hormone therapy can help treat these cancers by lodging in the receptors of the harmful cells so that the estrogen can’t get to the cells and feed the tumor.

One of these drugs, tamoxifen (Nolvadex), has been used for the treatment of known breast cancers and the prevention of new breast cancers in high-risk women. In terms of treatment, tamoxifen can improve a woman’s ten-year survival by 5 to 11 percent. For prevention, tamoxifen decreases the risk of developing breast cancer in the same breast or the other breast by 50 percent.

Its rare but serious side effects include uterine cancer, blood clots, and cataracts. If you take tamoxifen, the American Cancer Society recommends that you get a yearly pelvic exam to screen for uterine cancer. In many women, the drug also causes such menopause-like symptoms as hot flashes, weight gain, and mood swings. Tamoxifen shouldn’t be taken in conjunction with hormone replacement therapy.

Toremifene (Fareston) is similar to tamoxifen, but it is used primarily in post-menopausal women with advanced cancer who are estrogen-receptor positive.

A group of drugs called LHRH agonists suppress the ovaries when offered to pre- and perimenopausal women with breast cancer. The aim is to protect fertility during chemotherapy by preserving the ovaries. Medicines in this class include goserelin (Zoladex), leuprolide (Lupron), and triptorelin (Trelstar).

Another class of drugs, called bisphosphonates, is used to treat osteoporosis but is also used to treat breast cancer because this drug group strengthens bones, including bones to which cancer has metastasized.

Aromatase inhibitors are another form of hormone therapy that stop estrogen production in post-menopausal women (they are not effective at stopping the ovaries from making estrogen in pre-menopausal women). Letrozole (Femara), anastrozole (Arimidex), and exemestane (Aromasin) are the three aromatase inhibitors approved for treatment of breast cancer. These drugs have been compared to tamoxifen in several studies, and they appear to be more effective than tamoxifen when they are used alone or following tamoxifen treatment. They also tend to have fewer serious side effects. They do not appear to increase the risk of uterine cancer and only very rarely cause blood clots. Some side effects are increased risk of osteoporosis, pain in the joints and bones, hot flashes, and night sweats.

If these medications don’t work, progestins or androgens may be used, but they may cause undesirable side effects such as fluid retention or excessive body hair.

What other drug treatments are there?

Some drug treatments fight cancer with substances that act as “guided missiles,” seeking out and destroying cancer cells. These are molecules known as monoclonal antibodies, which are synthesized proteins that can carry chemo medications or radiation directly to cancer cells in order to destroy them. Researchers are also experimenting with ways to arm these molecular “destroyers” with toxins or radioactive particles that are released directly into the cancer cells when the missile hits home. Unlike regular chemotherapy, this therapy targets only harmful cells, and so promises to be much less toxic and debilitating to patients.

In some forms of aggressive breast cancer, cancerous cells go out of control and produce too much of a protein called HER2/neu, which is thought to give the signal for cells to multiply. Monoclonal antibodies are designed to latch onto the surface of those cells and make it impossible for the cells to keep reproducing. Tastuzumab (Herceptin) and lapatinib (Tykerb) are drugs that have been used for years for the treatment of HER2-positive advanced breast cancer. A newer drug, Enhertu (fam-trastuzumab), is being used to treat HER2-positive breast cancer that has been unresponsive to other drugs.

Government studies found that women who took Herceptin along with chemotherapy were only half as likely to see a recurrence of their cancer than women who received chemotherapy alone. “These are truly life-saving results in a major disease,” Dr. JoAnne Zujewski, a leading researcher for the National Cancer Institute, said in a statement released by the National Institutes of Health at the time.

About 5 percent of people who take Herceptin have suffered serious heart problems, especially when it was combined with other cancer medications; that’s why people using it for breast cancer treatment require heart monitoring (above). It also produces some flu-like symptoms and breathing problems in some women, and a few women may experience severe allergic reactions.

What else may be available soon?

What can alternative medicine offer?

No alternative remedies have been proven to cure cancer, but some, such as acupuncture, may help you feel better and recover faster from the side effects of conventional drugs. Some people report that smoking marijuana eases the nausea and vomiting resulting from chemotherapy. The Institute of Medicine under the National Academy of Sciences reported that the drug may be appropriate for patients not helped by anti-nausea medications. It’s best to check the laws in your state. In some areas marijuana is available for medical purposes.

The National Center for Complementary and Alternative Medicine (NCCAM) is sponsoring a number of clinical trials to study alternative adjunct treatments for cancer. .

Bryant J and Wolmark N. Letrozole after tamoxifen for breast cancer — what is the price of success? N Engl J Med 349;19. 3.