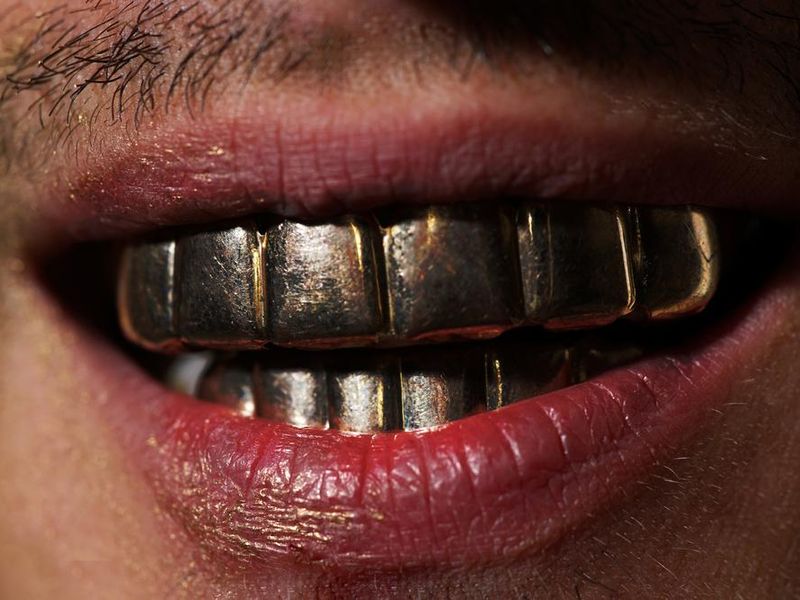 If I could call it a drink, call it a smile on da rocks

I got my mouth lookin’ something like a disco ball.

When a rapper starts rhapsodizing about his teeth, he’s probably talking about diamonds, gold, or platinum — not veneers. Paul Wall’s smile on the cover of his 2005 album The People’s Champ looks like a smuggling operation. As Wall boasts in one of his songs, his mouth has “more carats than Bugs Bunny’s lunch.”

In recent years, the always unpredictable tide of hip-hop fashion has taken an unusual turn. Following the lead of Wall, Snoop Dogg, and others, hip-hop artists and fans are turning their mouths into jewelry showcases. Cosmetic tooth covers — known as grills, fronts, caps, or slugs — have become a status symbol.

For the stars, status is often written in rows of diamond-encrusted plates of gold or platinum. People of more modest means sometimes settle for one tooth’s worth of silver. Grills of all prices and sizes are sold on the Internet. They can also be found at jewelry stores and novelty shops that specialize in gaudy accessories, or “bling,” as grill wearers would say.

The fad is good news for the diamond industry, but it may also be a boon for dentists — especially those who specialize in restoring rotting teeth. Used with extreme care, grills can be a coveted fashion accessory. But without constant vigilance, they can become a breeding ground for the bacteria that cause tooth decay and gum disease, says Eric Shapira, DDS, a San Francisco Bay Area dentist and an active member of the Academy of General Dentistry.

How risky are grills? “It depends on the level of a person’s dental IQ,” Shapira says. People who have their grills professionally fitted by a dentist and wear them only on special occasions — like, say, a rap concert or prom night — are probably safe, he says, especially if they brush and floss regularly when their mouthware isn’t in place.

The trouble starts when people wear grills for days, weeks, or even months on end. Some wearers even seal the grill in place with glue or denture adhesive. No matter how snug the fit, food and saliva are bound to slip between the grill and teeth. As Shapira puts it, food plus saliva plus time equals tooth decay.

Grills that are kept on too long can also be hard on gums, says Dennis Newton Jr., DDS, who practices in West Columbia, South Carolina. He is a member of the South Carolina Board of Dentistry, which took a public stand against grills and other forms of mouth jewelry as early as 2003. “They fit over the gums, which makes it totally impossible to keep the gums clean, no matter how hard a person tries,” he says.

Because many people put grills in themselves or have them installed by an untrained salesperson, the fit can be lousy, Newton says. (In South Carolina, it’s illegal for anyone other than a dentist to take a mouth impression, the only way to get an accurate fit.) If a grill isn’t the perfect size and shape, the metal could dig into the gums, he says.

Even if the grills do fit properly, the metal in grills can irritate the gums. Many people, Shapira notes, are allergic to nickel, a metal often found in cheap metallic jewelry. Grill wearers with a nickel sensitivity could end up with huge, puffy gums — not exactly the look they were going for.

Grills have ebbed a bit in popularity in some areas, but they are still especially popular in the South and Southwest, according to some accounts. But people who want to spruce up their smiles have lots of options other than grills. Shapira has personally drilled flowers and other images into teeth. He has also painted images on crowns and installed diamonds and rubies in dentures. Young people aren’t the only ones who want a high-carat smile.

Meanwhile, people who do use grills will be at less risk of serious decay if they wear them for only a few hours at a time on special occasions, and brush and floss at least twice a day when the grills aren’t in. Unlike some fads, a healthy smile isn’t likely to go out of style.

Interview with Eric Shapira, DDS, a dentist in the San Francisco Bay area and a spokesman for the Academy of General Dentistry