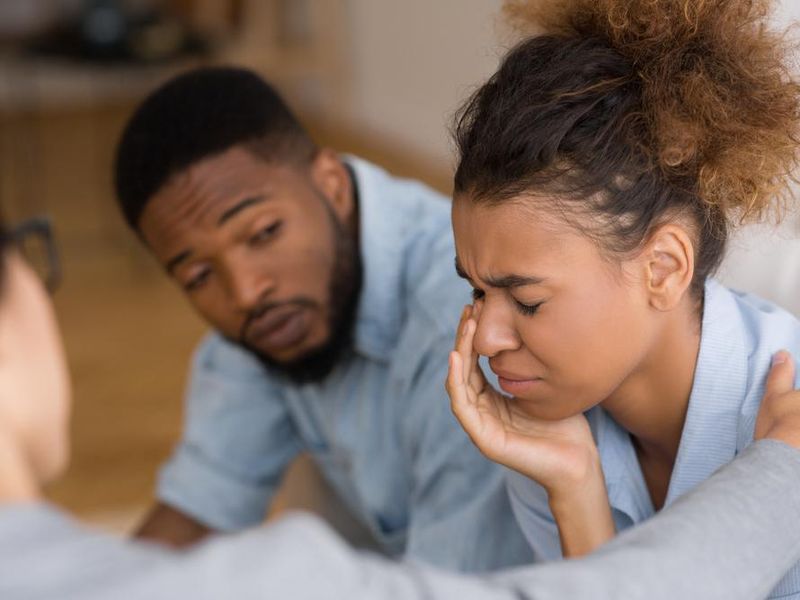 Sarah Schwartz* grew up in a fairly close-knit family where relatives were unafraid to express anger. When they were angry, they sometimes exploded and even yelled — sometimes at the top of their voices. Although these displays were unpleasant, they were never catastrophic. Eventually, Sarah learned, the anger cooled, apologies were offered, and life went on.

Her husband Paul, however, was raised in a household where family members verbally and physically punished each other when they were angry. It wasn’t unusual for people to scream and hurl objects in the middle of a fight. Outbursts were unpredictable, frightening, and sometimes quite public, causing him to fear for his safety, and even at times his life. For Paul, such displays instantly triggered deep feelings of real fear, threatening on a subconscious level his very survival. It wasn’t a surprise, then that Sarah and Paul’s individual approaches to fighting would set the stage for disaster. Although they delighted in each other’s company, their quarrels left them exhausted — and discouraged.

When they fought, Paul forbade Sarah to raise her voice in anger. If Sarah did raise her voice, Paul would go ballistic. If she didn’t lower her voice right away, he would shout her down to show how unreasonable and out of line she was. Paul felt Sarah’s behavior was unfathomable and wouldn’t stand for it. Sarah, on the other hand, felt Paul’s response was a wild over-reaction that would escalate what had been a minor dispute into a major, marriage-threatening brawl. Paul’s attempts to stifle a valid emotion prevented her from being a full person, Sarah felt. Both felt the other was wrong and had to change.

It wasn’t until they were two years into their marriage that they decided to see a private therapist. By then their widely divergent philosophies of arguing were beginning to take their toll, and they realized that they had to get help for their marriage to survive. In their sessions, the two learned that neither view of fighting was wrong. Besides teaching them to share responsibility for an argument, the therapist also showed them how to use “time-outs” to stop fights before they spiraled out of control.

“I was so relieved that we found a way to resolve a fight that didn’t involve shouting louder or having to give in,” Paul says.

Unlike Sarah and Paul, many couples don’t even consider counseling until it’s too late, and a divorce or separation looms. Many decide to seek help only after years of conflict or trauma, when communication has already broken down, and both are reluctant to listen or apologize, much less admit fault. Some seek counseling after an infidelity, a death in the family, violent behavior, or as a last-ditch attempt to avoid separation or divorce. Sometimes, neither side even understands or is aware that something is wrong. By then, adults aren’t the only ones traumatized. There may be children or stepchildren involved.

If you see an impasse in your relationship, and it continues to make you feel “stuck” or afraid to deal with the problem — whether it’s sexual, financial, or emotional — it may be a good reason to seek couples therapy. And although it’s sometimes called “marriage counseling,” couples therapy is available to all kinds of troubled partnerships, whether you’re married or unmarried, straight or gay.

Homework for a good relationship

Some couples also choose group therapy, in which several couples meet with a therapist to discuss their problems together. Shortly after Sarah and Paul married, for example, they agreed that an eight-week couples workshop would help them navigate the new emotional territory of marriage. At first, “it was more than a bit nerve-wracking to walk in, sit down and discuss our private problems in front of four other couples, all of them perfect strangers,” says Sarah. “I was sweating bullets there for a while. But it wasn’t long before we both felt fairly comfortable sharing our trouble spots, especially since everyone there had their own relationship struggles, and, for the most part, we were all grappling with the same issues on one level or another.”

The class, led by a licensed couples therapist, help them focus on improving communication, resolving conflict, and strengthening their friendship and intimacy. Some couples in the group were also startled to get “homework” from the group’s leader, but Sarah and Paul enjoyed several of the exercises so much that they kept them up long after the workshop ended. Their favorite was a daily check-in: they were instructed to take turns telling their partner how they felt that day, what they felt toward their partner that moment (warm, angry, sexual, distant, and so on), and one thing they appreciated about their partner that day. For Sarah, this exercise brought on tears, laughter, and introspection, but it always promoted a feeling of closeness with Paul. “We learned something new about each other every time,” she recalls.

Another exercise they found especially valuable was called “caring behaviors” — verbal or nonverbal expressions of interest, respect, concern, and affection. Experts believe that frequent small, loving gestures are critical to maintaining positive relationships, especially during stressful times. Sarah and Paul each made a written list of 10 or so caring behaviors that they would like from each other to do make them feel loved and cared about, then tacked it on the refrigerator. Partly as a result, Sarah laughs, she still finds “I love Sarah” notes and private jokes tucked in the freezer, medicine cabinet, and other places she’s bound to visit.

Most marriage and family therapists practice relatively short-term treatment; the average is 12 sessions. But some problems will require longer treatment: Many couples seek additional marital therapy for follow-up further down the line.

Although the goal of counseling is to restore a troubled or failing relationship, sometimes a couple undergoing therapy may decide that staying together isn’t in their best interests. It’s not that counseling has failed. It may just mean that the partners have recognized their differences, understood why the relationship didn’t work, and decided to move on.

Clara and Daniel went to couples therapy off and on for years during their 11-year marriage. Today they are separated, and heading for divorce. “I don’t regret the time we spent in therapy,” says Clara. “Therapy helped us clarify the issues between us, and it helped us communicate with each other. From my point of view (and, to be fair, my husband probably has a different view), Daniel wasn’t willing to really work on things. If he had been, I think we might have saved our marriage. But today we are friendly: we are kind to each other, and we are good co-parents. Therapy doesn’t work miracles, but it can make you conscious of your dynamics. And that is very valuable, whether you stay together or not.”

As for Sarah and Paul, they say their relationship has never been stronger. “Couples counseling was a scary step for us, an admission that we needed help in making our marriage work,” Sarah says. “We’re glad we did it. It taught us how to solve problems together, rather than blaming each other and trying to prove you are right and your partner is wrong. I can’t speak for everybody, but we now have a strong and happier relationship, and I think counseling really helped us along the way.”

*The couples in this article requested pseudonyms.