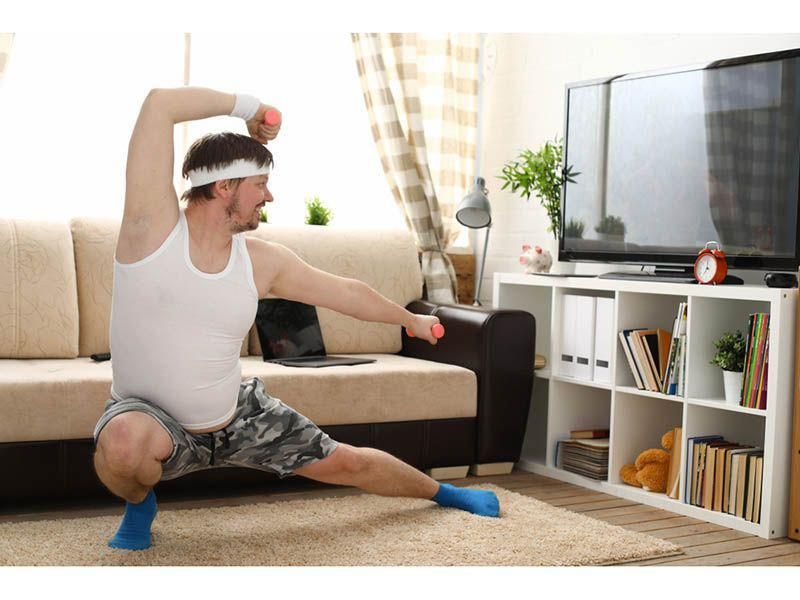 Everybody knows exercise is great for both body and mind, so why do so many of us stay rooted to the couch? Simply put, getting motivated to exercise isn’t always easy. You may already enjoy a life filled with watching television, reading, and surfing the Internet, and might cringe at the mere thought of hitting the gym. If spinning classes and hard-core aerobics were your sort of thing, you’d already be out there sweating with the other exercise fanatics. But take heart: Even the most committed couch potatoes can find a way to get active, says Amanda Visek, PhD, an exercise scientist at George Washington University Medical Center in Washington, D.C., and a consultant with the Association of Applied Sports Psychology. Try it — the couch will still be there when you’re ready for your well-deserved rest.

Your body may be desperate for more exercise, but physical fitness can’t be rushed. “It’s best to start slowly and build gradually,” Visek says. It takes time to build up the strength, stamina, and confidence needed for serious exercise. So don’t try to make up for years of game shows and soap operas with a frantic burst of activity. Doing too much too soon is a recipe for a quick flameout. “If you’ve been a couch potato, you don’t want to try a three-mile run,” she says. “You’re going to be really sore, and you won’t want to do it again.”

If your body isn’t used to exercise, start with just 10 minutes of light activity each day. According to Visek, walking, biking, and swimming are all great exercises for beginners. For most people, they don’t involve learning any new skills, and your body won’t take a pounding. Walking is an especially popular option for reformed couch potatoes. You can start by simply walking around the block. If that feels good, try two blocks. The next time you go out, try going a little farther still. You’ll soon notice parts of your neighborhood you didn’t know existed.

As you start exercising, ask yourself a very important question: Are you truly enjoying yourself? If the workouts aren’t pleasurable or satisfying, you’ll be back on the couch in no time. “That’s the way humans are,” Visek says. “We seek out things we like and avoid things we hate.” If you truly loathe exercise, you may never find a “fun” routine — you just might have to settle for something that doesn’t fill you with dread. Who knows? It might be enjoyable once you get the hang of it. Or perhaps you’ll find ways to break a sweat that you never thought of as exercise, such as salsa dancing, orienteering, yoga, gardening, or hula-hooping.

If the outdoors doesn’t sound appealing, indulge your inner couch potato with workouts in front of the television. Pedaling an exercise bike or lifting some hand weights could go quite nicely with your normally scheduled programming. You can even make an exercise out of sitting: Put a straight-backed chair in front of the TV, then stand up and sit back down a few times during the commercials. To give yourself a little challenge, do modified squats: Lean forward and don’t sit down all the way, hold for a few seconds, then stand up again.

If you don’t get much exercise now, just about anything you do will be a step in the right direction. You definitely don’t have to push yourself too hard to get real benefits. A 2007 study of 464 older, overweight, or obese women who spurned exercise found that women could improve their fitness by riding an exercise bike for just over an hour each week — a reasonable amount of time for anyone’s schedule. It’s also worth noting that women in the study who worked out harder — up to about three hours per week — enjoyed even greater boosts in stamina.

To get the most out of exercise, you should gradually work your way up to 30 minutes of moderate activity four to six times per week. Put in TV terms, that’s only four to six episodes of 30 Rock, or two to three episodes of CSI each week. You can get there, even if you have to start with just the commercials.

As you prepare to get off the couch, take time to think realistically about your goals. If you want to transform your body instantly, you’ll be disappointed. The benefits of exercise — including a leaner body, increased strength, and extra energy — build slowly over time, and you may not feel especially good when you first start.

You should also consider your motivation. If you’re exercising purely out of guilt or a sense of duty, you aren’t likely to stick to it over the long haul. Instead, Visek recommends thinking of exercise as a gift to your body, a gift that can be given over and over again.

Just about anyone can safely add exercise to their lives, but some of us should use extra caution. “People who are extremely overweight or completely inactive should talk to a family physician before starting exercise,” Visek says, especially if they’re considering anything more strenuous than a walk around the block. In addition to giving the green light, a doctor might have some customized advice for safe and successful exercise. Be sure to tell him or her about any dizziness, nausea, or chest pains — these are signs that your workouts need to be a little less vigorous, or that you should wait until you’re in better health to begin. As you’re getting started, forget the old adage “no pain, no gain.” If exercise really hurts, stop immediately and talk with your doctor about next steps. Remember: Your goal is to feel better, not worse.

American Academy of Family Physicians. Exercise: How to get started.