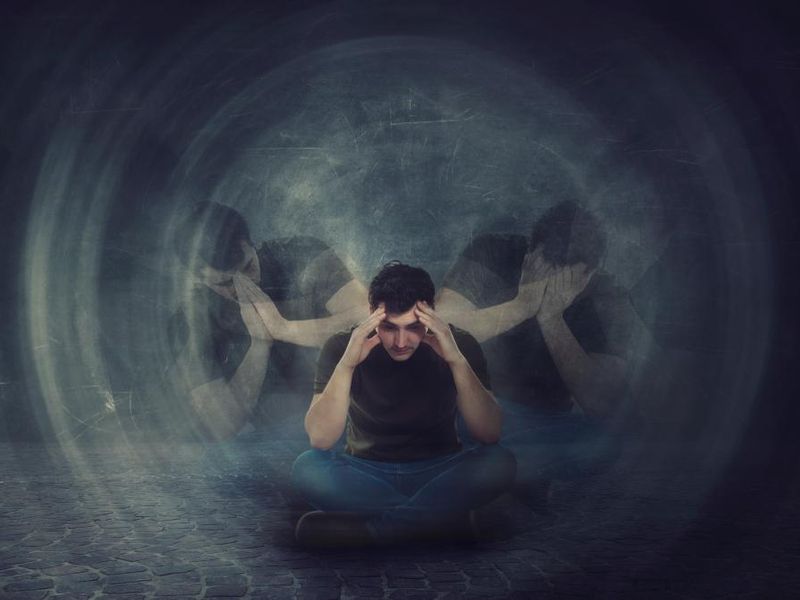 After countless phone calls pleading for an appointment, the patient appeared in Dr. Luis Fajardo’s office. She took a seat and began frantically pulling little bits of material out of her nose. “These are the parasites that are bothering me,” she cried. “They’re crawling inside my nose.”

Luis Fajardo, a physician and professor emeritus of pathology at Stanford University, looked at the material quizzically. Then he dutifully examined it under a microscope, hoping to soothe the patient’s fears. “These are little bits of Kleenex,” he told her gently, almost apologetically.

What truly plagues this woman is a delusion of parasitosis. An uncommon psychological condition, a delusion of parasitosis is the mistaken — yet firmly held — belief that parasites have somehow invaded the body. The “parasites” can take many forms, explains Dr. William Gould, a physician and clinical professor of dermatology at Stanford. The creatures can be fleas, mites, insects, or worms. In fact, people with the condition often mail or deliver tiny containers — the holding tanks of the so-called parasites — to physicians in hope of confirming the pests’ existence. In some cases, patients believe they are suffering from Morgellons disease, a condition marked by red, itchy skin lesions — and one much of the medical establishment believes does not have a physical cause.

Fajardo and his colleague David Relman, learned about delusions of parasitosis the hard way. In 1996 the two physicians published a paper in The Lancet reporting the discovery of a brand new parasite, which had been found in the liver and in other intra-abdominal tissues of a man with AIDS.

People with delusions of parasitosis read of the discovery and wasted no time contacting the researchers by phone, mail, or email. All of the calls and correspondence — 20 or 30 each time the study was published — were the same: cries for help. The writers claimed to have long been acquainted with the parasite the researchers had discovered. In fact, their bodies were teeming with it.

“Often they were hysterical. Some people thought they were about to die,” says Relman, an associate professor of medicine (infectious diseases) and of microbiology and immunology at Stanford. “Others even told me they would donate an organ to science if we could find out what parasite was attacking them.”

Such desperation is not unusual. Often accompanied by depression and low self-esteem, the condition can be psychologically devastating.

“Their lives can begin to revolve around their beliefs,” says Gould, co-director of Stanford’s Dermatology Psychiatry Liaison Clinic.

Some patients can no longer function at work or at home. They may cut ties with friends and family because they suspect everyone thinks they are crazy. They end up isolated, stranded in their delusion.

Curiously enough, people with delusions of parasitosis are otherwise reasonable — not even phobic about insects — and come from a variety of socioeconomic and occupational backgrounds. The typical patient is a woman who is middle-aged or older. The younger the woman, the more likely she is to be poor, lonely, stressed, and isolated. However, the most rapidly growing segments of the patient population tend to be white males who develop the syndrome by abusing drugs, particularly methamphetamine and cocaine, which sometimes results in the sensation of things crawling under one’s skin.

Though rare, delusions of parasitosis is one of the more common psychologically induced dermatological problems. In fact, out of the hundreds of patients Gould sees each year, only 10 to 15 have delusions of parasitosis. The condition is ideally suited for treatment in the Dermatology Psychiatry Liaison Clinic, which Gould directs with Dr. Thomas Gregg, an associate professor of dermatology and psychiatry at Stanford. The two see many patients who have skin conditions linked to psychological distress. The clinic’s team of doctors, including a dermatologist and a psychiatrist, sees each patient and evaluates his or her condition.

Fajardo and Relman’s callers had obviously not found their way to the clinic. “These were people who had been told by many doctors that there was nothing wrong with them,” Relman says. “Yet they were still insistent that they were beset by parasites.”

The first caller showed him the bits of tissue paper. The second was convinced worms were crawling out of her skin. But when Fajardo asked her to show him the worms, she produced tiny bits of hair. “She had been pulling hair off her legs,” he explains.

Relman and Fajardo could do nothing but tell the callers that they could find no evidence of parasites. The physicians often referred the clients to dermatologists. They tried to be gentle. “You can’t just tell someone, ‘You have delusions.’ You must be tactful,” Fajardo says.

People with delusions of parasitosis often go from doctor to doctor seeking relief and confirmation of their suffering. If they are lucky, they are referred to psychiatrists by frustrated doctors from other fields or by a relative who suspects that the patient may be delusional. Because patients are wary that a psychiatrist may challenge their delusions, they are likely to resist recommendations to seek psychiatric help. A physician might persuade such patients to see a psychiatrist, however, by suggesting that a mental health professional could help them manage the emotional hardships created by their affliction.

But before a psychiatrist can treat a patient, examinations must be performed by experts to ensure that, in fact, no parasites or underlying medical problems exist. Examinations include a physical exam, skin scrapings, blood count, thyroid function tests, and at times, vitamin B-12 levels and allergy tests. Questions about the patient’s drug use are essential.

Medical tests sometimes reveal patients are NOT imagining things. A doctor in Great Britain managed to extract several pieces of what appeared to be fibers from his own skin and took it the nearby Natural History Museum to be analyzed in the lab. The “fibers” turned out to be tropical rat mites. “What they do is go in through the hair follicles and find a blood vessel at the bottom. That’s where they sit and that’s what the fibers are –  their legs folded back,” the physician told writer Will Storr, who reported the story in the online magazine Matter.

Ana Oaklander of Harvard Medical School has said the itch may involve nerves misfiring. “In my experience, Morgellons patients are doing the best they can to make sense of symptoms that are real,” she told Storr. “These people have been maltreated by the medical establishment. And you’re very welcome to quote me on that. They’re suffering from a chronic itch disorder that’s undiagnosed.”

Oaklander told Storr that some patients may also be suffering from delusions of parasitosis, but that shouldn’t be a first assumption. Once a parasitic infestation or nerve disorder has been ruled out, however, other help to alleviate the problem is available. Antipsychotic medication is often quite effective. Getting patients to take it, however, may be complicated. To the patient, taking the drug can be tantamount to admitting the parasites are not real.

“You really can’t confront them because the delusion has incredible power,” says Dr. Chris Hayward, professor of psychiatry and behavioral sciences at Stanford. Hayward has found that a patient’s delusion is sometimes precipitated by some severe life event such as a death in the family. “The delusion may be a maladaptive response to the life event,” he says.

Gould and Gragg published groundbreaking work contributing to the current treatment of delusions of parasitosis. Their approach was based on experiences with typical patients who had crossed their paths decades ago: One was a 66-year-old widow who came to the office complaining of having been infested by parasites for a year. She believed that her home was overrun with bugs and that they were crawling through her scalp and drinking from her eyes.

She had consulted several physicians, one of whom had made an incorrect diagnosis of scabies and asked her if she had been “sleeping with a bum.” Another doctor had advised her not to shampoo so as to give any parasite a chance to grow and thereby become visible for identification. After interviewing the woman, Gould and Gragg found that she had recently suffered two deaths in her family.

Then, as now, Gould and Gragg contended that the most important tactic in treating the condition is establishing rapport with such patients — not patronizing them or dismissing them. Often, delusional patients can be so insistent in their beliefs that they make physicians feel hostile and angry, Gould says. A physician should put aside these feelings and treat the person with patience, concern, and respect.

Only after getting to know the patient in this way is it possible for the doctor to suggest antipsychotic medication. “We try to avoid the question of how the medicine works, but we do say, ‘Other patients we have seen have had the same sort of problem and, although we don’t have all the answers, this medicine will probably make you feel better,'” says Gould.

Once the patient goes on the drug — often the antipsychotic pimozide — the delusions may start to disappear within two weeks. Gradually, the delusion begins to lose power and the patient is held by it less and less. On her second visit, the 66-year-old who thought bugs were crawling out of her scalp made few remarks about the parasites and talked to the doctors about problems in her life. On the third visit she remarked that she was “all better” and now had a job.

Gould finds that making himself and other doctors at the clinic available to these patients helps decrease their feelings of isolation. “We don’t call what we are doing psychotherapy. But in essence it is,” he says.

Regular psychotherapy, however, doesn’t seem to do the trick. While therapy can help the patients deal with any life event that may have triggered the delusion, it doesn’t rid the patients of their beliefs that parasites are attacking them, according to Hayward.

Current research on delusions of parasitosis (the disease was first described in scientific literature in the 1800s) is headed in a new direction. Scientists now suspect that the delusion arises from a chemical imbalance in the brain, which may explain why antipsychotic drugs are an effective treatment. New research focuses on finding even more effective drugs.

Relman and Fajardo continue to receive occasional calls from people with delusions of parasitosis and are still struck by their imaginations. “One patient believed his parasites were secreting an amber-colored oily substance that coated his skin, and seeped into his washer and dryer and gummed them up,” Relman says. “And he said it was all over the walls of his home.”

Relman just keeps referring these patients to other doctors who can better treat them. “It’s funny, but many of these patients’ stories are very similar,” he says. “Perhaps these patients are acting on fears we all have. Fear of parasites may be a deep-seated image that we all carry.”

“And of course, this isn’t to say that there aren’t patients out there with previously unrecognized parasitic infestations,” Relman adds. “The problem is identifying these people and distinguishing them from those who believe they have an infestation but don’t.”

Editor’s note: This article is reprinted from a Stanford magazine with permission, but has been updated with new thinking on Morgellons disease.

Storr, Will. The Itch Nobody Can Scratch. Matter,

Interview with David Relman, M.D., an associate professor of medicine (infectious diseases) and of microbiology and immunology at Stanford.

Interview with Chris Hayward, M.D., professor of psychiatry and behavioral sciences at Stanford