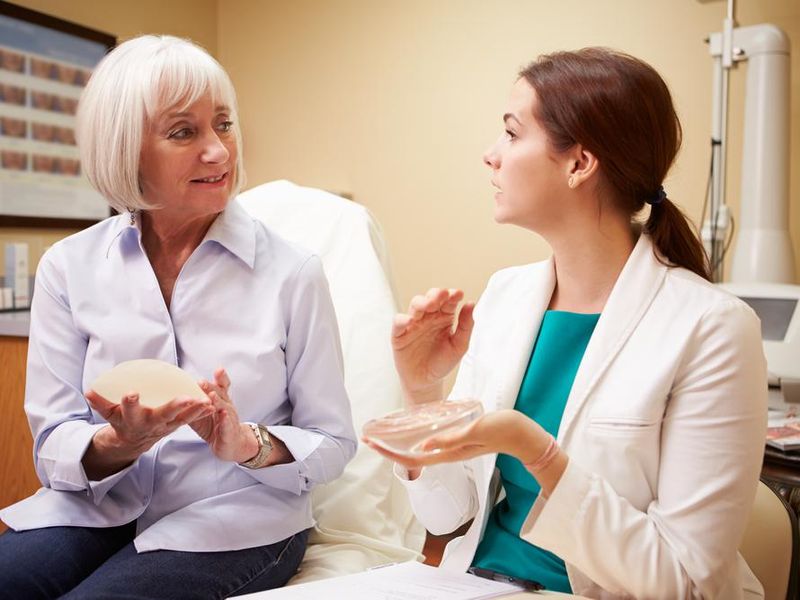 You’ve made it through many of the hard choices in your breast cancer treatment only to confront another major one: whether — and when — to have your breast (or breasts) reconstructed after your mastectomy. Some women want a fully reconstructed breast that looks as much as possible like the original. Others want a new breast that simply helps them look the way they like in a bathing suit. Still other women have no desire for breast reconstruction at all.

In Berkeley, California, civil rights lawyer Alice Philipson was diagnosed with breast cancer in the midst of an important trial. She had a lumpectomy that removed a third of her right breast, then a complete mastectomy after the first surgery failed to remove all the cancer. She opted against reconstruction.

“I had already undergone two surgeries and found them quite arduous and wasn’t looking forward to a third surgery and its recovery,” says Philipson, who was 49 when she was diagnosed. “I didn’t have to have (reconstruction) right then, and I wanted to see how I coped with having one breast.” She coped just fine.

“Psychologically, it’s not important to my body image and my self-image as a woman to have two breasts. It wasn’t necessary for my partner either. And people don’t see it. I wear a lot of vests and cardigan sweaters. I wear business suits and no one notices.” She will occasionally wear a prosthetic breast when she’s in a bathing suit, but if she’s on her boogie board catching a wave, the prosthesis is an annoyance and she’ll go without it. “People just see one breast,” she says, “and that’s the way it is.”

An immediate reconstruction means a longer initial operation, but it spares you the distress of living for a time without a breast. On the other hand, delaying the reconstruction enables you to deal with your cancer and its treatment without the added burden of having to make more decisions right away. Depending on your medical condition, you and your doctor may decide that a lengthy initial surgery would put undue stress on your body.

How is breast reconstruction done?

During your mastectomy the surgeon will probably remove all the breast tissue, the nipple, and the pigmented skin around the nipple called the areola. Some of the lymph nodes in the underarm may also be removed if necessary. The amount of breast skin remaining (called the breast pocket) will depend primarily on the location and size of your tumor. The breast pocket can be filled with your own tissue, with implants, or with a combination of both.

What’s involved in reconstruction with an implant?

Surgery to create a new breast from an implant takes less time and is less complex than reconstruction using tissue from another part of your body. However, the breast won’t feel like real tissue.

If enough of your breast skin was saved, you can have a full-size implant placed in your breast pocket right away. If a lot of skin was taken in order to remove the cancer, your surgeon can insert an empty silicone sack called an expander. Then he or she slowly inflates the sack by adding saline (salt water) at weekly intervals over several weeks or months. As the sack enlarges, your skin stretches to accommodate it. Sometimes the expander is left in and acts as the implant; otherwise it’s exchanged for a permanent implant once the breast pocket is the right size.

If you’re having an implant inserted immediately after a mastectomy, the procedure will take two to three hours, and you may stay in the hospital for as long as three days afterward. If you decide to wait and have the implant put in later, the surgery will take one to two hours and will either be done as an outpatient procedure or require a one-night hospital stay. You’ll probably be able to return to a desk job in about three weeks, but healing times vary from person to person.

Numerous studies have found that saline implants have no harmful effects. Implants filled with silicone gel were restricted in 1992 after hundreds of thousands of women filed lawsuits claiming that the silicone had leaked into their bodies and brought on health problems ranging from connective-tissue diseases to breast cancer. In November 2006, the Food and Drug Administration lifted its restrictions on silicone implants, approving their widespread use for breast augmentation and reconstruction. At that time, the FDA announced that it considered silicone implants to be safe and effective.

What are the risks of using today’s implants?

Both saline and silicone implants can rupture. A rupture of a saline implant will cause the breast to deflate. Your body could easily absorb the salt water, but a deflated implant would need to be removed or replaced, which would necessitate another operation. A study published in 2009 of 876 women who had saline implants found that 90 percent of the implants remained intact after 10 years. If a silicone implant ruptures there may be no symptoms. Because of this, the FDA recommends monitoring silicone breast implants with routine MRI scans every two years, starting three years after the initial implant surgery.

The scar tissue that forms around the pouch has also been known to harden and cause pain or change the appearance of your breast, which again would require more surgery to correct. And because implants aren’t part of your body, they have a greater chance of causing an infection in the surrounding tissue.

How do surgeons reconstruct a breast from your own tissue?

Reconstructing a breast from your own body tissue is a much more extensive procedure called flap reconstruction. It involves taking a section of skin, fat, and muscle from your abdomen (the transverse rectus abdominus skin-muscle or TRAM), upper back, or, less commonly, from your thighs or buttocks and using that to fill your breast pocket. Unless you’re very thin, there’s likely to be enough extra fat and skin in your lower belly to make a nicely shaped small to medium-sized breast.

Leaving the flap of tissue partly attached to its blood supply, the surgeon slides it up under the skin to fill the empty breast. The additional skin on the flap can be used to replace any that was lost during the mastectomy, which makes an expander unnecessary. The abdomen is closed, with the scar extending from hip to hip, much like that from a “tummy tuck,” and you’ll get the same result — a flatter stomach. Sometimes the surgeon will replace the muscle with surgical mesh to prevent a hernia. There’s a permanent side effect from this surgery however: you lose so much abdominal muscle that you may no longer be able to do a sit-up or move from a lying to sitting position without difficulty.

If the tissue is being taken from your back, there may not be enough to fill the breast, and the surgeon may need to use an implant as well. Using tissue from the buttocks is a highly complex procedure in which the tissue (called a free flap) is completely detached from its original blood supply and reattached to blood vessels in your underarm. This operation, done only at certain hospitals around the country, requires the skills of a plastic surgeon trained in microsurgery.

Flap reconstruction usually takes six to seven hours and requires you to stay in the hospital for three to six days. Recovery times differ depending on the procedure and the individual patient. In general, it takes longer to recover from flap surgery than from implant surgery, and several months may pass before you’re back to normal.

Some women choose to stop after this operation and live with a breast mound that fills clothes and bathing suits; others opt for the additional surgery that creates a nipple and areola.

If you choose to get additional surgery, you’ll return after the previous incisions have healed. Your doctor will shape the nipple from the skin of the reconstructed breast or use part of the skin from your other nipple. This reconstructed nipple will always appear to be erect. An areola may be made with a tattoo or with a skin graft of dark skin, usually taken from the crease where the inner thigh meets the groin. During this operation the surgeon may do a lift, a reduction, or an enlargement of the other breast to make it match the newly reconstructed one.

What are the risks associated with flap reconstruction?

This is a major surgical procedure and will likely involve extended recovery and healing. You may also experience changes in breast sensation, and some loss of sensation at the tissue donor site. Poor wound healing and fluid collection and infection are additional risks.

Your reconstructed breast will feel somewhat firm at first but will soften as it adjusts to the new blood supply. In a small percentage of cases, part or all of the transplanted tissue fails to get enough blood and dies. If that happens, you may need further surgery to remove the dead tissue and reshape the breast. This is more likely to be a problem after a free-flap procedure. With the TRAM flap, the muscles in your abdomen are likely to be permanently weakened.

How do I choose which is better for me?

Having your breasts reconstructed with implants requires a shorter operation, which means less time under anesthesia and usually less blood loss, plus a shorter recovery time. And you’ll generally have less scarring. A flap procedure involves surgery on the donor site as well as your breasts, which results in scarring and the potential for complications in both places.

On the other hand, implants don’t have the consistency or feel of normal tissue; they don’t move or hang like a normal breast and will always feel firmer. Sometimes you may be able to feel the edges of the implant beneath the skin of your breast. However, even a breast reconstructed from your own flesh will not feel like a normal breast.
Women should be warned that reconstructed breasts “will not have normal sensation, and at times can cause chronic pain from cut-nerve endings. A reconstructed breast will not feel, move, nor age like a regular breast,” wrote President Debra Johnson of the American Society of Plastic Surgeons in the Times, adding that she hoped future research would one day alleviate these problems.

Numbness after reconstructive surgery may not go away, according to some breast cancer survivors. In a letter to the New York Times, one woman reported that she could no longer feel her children when they hugged her.

The decisions surrounding breast reconstruction are complicated and personal. Your surgeon and plastic surgeon should be able to help you sort through the issues and come up with the solution that will work best for you.

Lipworth, L, Tarone, RE, McLaughlin, JK. Breast implants and lymphoma risk: A review of the epidemiologic evidence through 2008. Plastic and Reconstructive Surgery 123(3): 790-793.