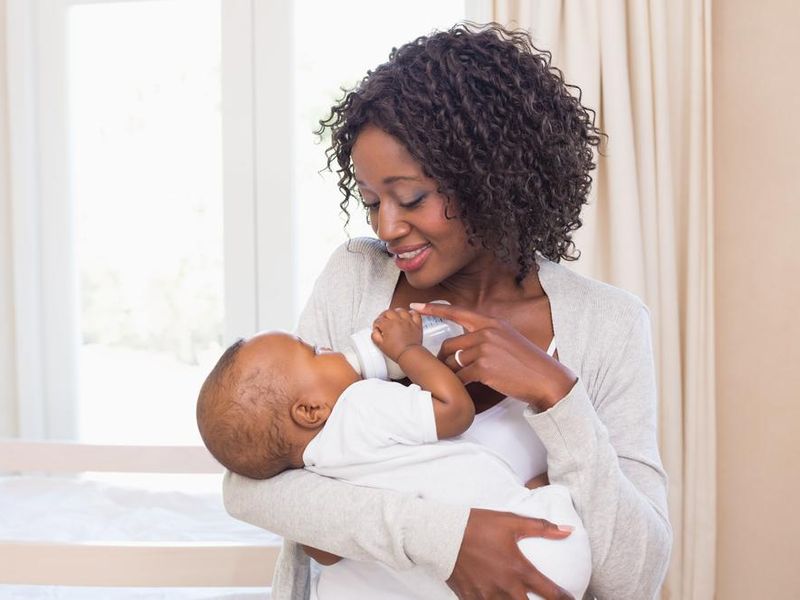 How to bottle-feed a baby isn’t always clear, especially if you’ve never handled a bottle before. There’s the question of how much should you give a growing infant, what formula to use, and whether he should sit upright when he’s eating.

Even mothers who breastfeed their babies may sometimes use a breast pump to express milk and feed the baby with a bottle. By feeding your baby correctly from the bottle, you’ll be giving him an excellent start.

What type of formula is best?

If you’re not using breast milk, most parents choose powdered formula. You can also get ready-to-use varieties packed in cans if you’re willing to pay extra. The actual ingredients in the formula are far more important than the packaging.

For most babies, an iron-fortified formula based on cow’s milk (such as Carnation, Enfamil with iron, Good Start, or Similac with iron) would be a good choice. Children can’t digest regular cow’s milk until age 1. In fact, some doctors report that parents who regularly fed their infants with cow’s or goat’s milk because they mistakenly thought it was healthier often discover later that their babies were not getting the nutrients they needed and were sometimes malnourished. Infant formulas, in contrast, have all been fortified to be nutritious and easy on young stomachs.

The extra iron in formulas is especially important. Many children have a shortage of this vital mineral, and the American Academy of Pediatrics recommends iron-fortified formula for all bottle-fed babies until they reach their first birthday. Babies may become iron deficient if the mineral is not in their diets starting from day one. (When babies start eating at 6 months old, doctors often recommend an iron-fortified rice cereal for the same reason.) You can also find formula that’s fortified with both iron and omega-3 fatty acids, which are also good for a developing infant.

If regular formula triggers allergic symptoms, diarrhea, or vomiting, ask your doctor for advice. He or she may recommend a lactose-free soy formula such as Isomil or ProSobee. Another option, somewhat more expensive, would be a formula containing protein hydrolysates, such as Alimentum or Nutramigen, which can be quickly digested. These are often used for premature infants in the first weeks or months to keep them nourished during this critical period. Protein hydrolysates are also a good choice if your baby is allergic to cow’s milk. Soy formulas, in contrast, are so similar to cow’s milk that they too might cause allergies or vomiting.

Don’t worry if your baby spits up occasionally, and don’t switch your baby’s formula without first checking with your doctor. Most babies can tolerate either cow’s milk-based or soy-based formula just fine. The key is to work closely with your doctor if you suspect a problem.

What kind of bottle should I use?

For years there has been controversy about the safety of bottles made from certain types of older plastics called polycarbonates. The Consumers Union has long advised parents of young children to replace them with bottles made of glass or polyethylene, an opaque, less shiny plastic that does not leach a chemical called bisphenol-A. The group cited research indicating that microwaving or boiling older polycarbonate bottles causes hazardous chemicals to leach into milk. Since then, numerous studies have found that BPA does leach into the contents of bottles and high levels of BPA in urine have been associated with chronic diseases, including heart disease and diabetes. BPA has also been shown to interfere with hormones.

Several years ago, the American Academy of Pediatrics warned parents and caregivers NOT to put plastic baby bottles or bowls in the microwave or dishwasher to prevent the transfer of harmful chemicals during the heating process. Indeed, numerous manufacturers have voluntarily stopped producing bottles with bisphenol-A, and there are plenty of alternatives on the market today. To avoid the risk of these chemicals leaching into your baby’s milk, don’t use bottles marked with a 7 or with PC, and never heat a bottle in the microwave. Also, handwash your baby’s plastic bottle, bowls and plastic cutlery.

How should I prepare a bottle for feeding?

Between feedings, wash the bottle and nipple in hot, soapy water.

When filling a bottle, it’s extremely important that you follow the directions of the formula. With most powdered formula, you need at least one level tablespoon of powder for every 2 ounces of water you use. Don’t add more or less water than directed. Watered-down formula won’t give your baby the nutrition he needs, and overly thickened formula may be hard for your baby to digest.

Unless you have a ready-to-use variety, you’ll have to mix the formula with water. Old-fashioned tap water should be fine in most cases, unless it comes from an untested well or your city has some sort of contamination problem. Turn the tap to cold and let it run for a minute or so before making the formula. If you don’t trust the tap water, you can use bottled or distilled water.

If you use distilled water or water that is not fluoridated, ask your doctor about whether fluoride drops are right for your baby. You can also buy distilled water that contains fluoride for preparing formula. And if you’re concerned about the safety of your tap water, contact your local water department and have it tested for lead and other impurities.

You may have heard that formulas need to be heated, but most babies will happily drink it cold. New research has shown that heating plastic baby bottles causes the baby to ingest microplastics alone with the nourishing formula, so cold is best. And besides the risk of microplastics, there are other reasons not to use a microwave to warm up the bottle. Microwaves cook unevenly, and your baby could get burned even if the first few drops feel cool.

How much formula does my baby need?

Your baby’s appetite will come and go during the day, and some meals will be heavier than others. If he loses interest in his bottle, he’s done feeding for now. Toss out the remaining formula, wash the bottle and nipple, and wait until he’s hungry again.

How often should I offer him a bottle?

The best time to feed him is when he’s hungry. For the first three months, that usually means every two or three hours. After that, he’ll probably be able to last three or four hours between meals. Don’t worry — he’ll let you know when he’s ready to be fed. Babies are incredibly good at telling us when they are hungry and when they are full. You just have to listen and watch.

Do I need to burp my baby during feedings?

Burping isn’t usually necessary. Your baby might spit up a little less if you give him a chance to burp, but he won’t cry less. If you want to burp him, hold him upright and gently pat his back for about one minute halfway through the feeding and once again at the end of the feeding. He might like being patted on his back by someone who loves him, too.

How can I prevent baby-bottle tooth decay?

As soon as your baby develops teeth, you need to start protecting them. Never fill your baby’s bottle with juice, soda, or other sweetened drinks. Not only will sugary drinks hurt his teeth, they will heighten his desire for sugar. Also, you shouldn’t let your baby fall asleep with the bottle in his mouth, even if the bottle contains formula. If he needs something to suck on at bedtime or between meals, its OK to give him a pacifier.

What’s the best way to travel with a baby who still needs a bottle?

Traveling with a baby can be easy if you plan carefully. Fortunately, certain brands of baby bottles come with disposable liners that have been sterilized. You can prefill them with the correct amount of powdered formula before you travel. When your baby is hungry, just add water and feed.

With this method, you don’t have to clean the bottle. The liners can be thrown away after you’re done. Just use another prefilled liner when your baby is hungry again. But do remember to wash the nipples between feedings.

Microplastics are seeping out of baby’s bottle. HealthDay, Cot. 19, 2020. https://www.usnews.com/news/health-news/articles/2…