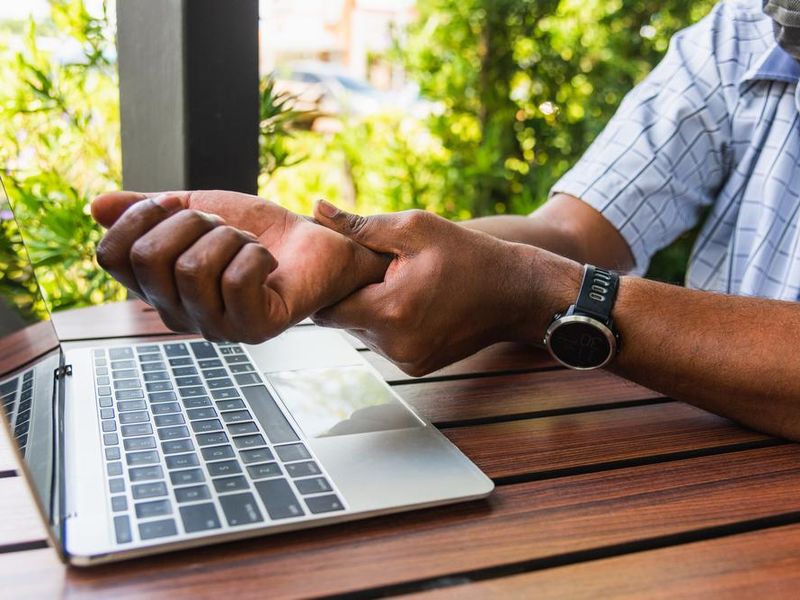 Baby boomers everywhere are now experiencing what they thought they never would: old age. Lots of the people born between 1946 and 1964 (the usual definition of a boomer) are now eligible for senior citizen discounts at restaurants. Many have grandchildren. And many have sore, creaky joints, the ultimate badge of aging.

Charlie Banks* of Billings, Montana, was at the younger end of the baby boom spectrum and when he played with his dogs or his two school-aged girls, he seemed younger still. But even at his age, he was no stranger to the pain of arthritis: This teacher and landscaper has severe bursitis in each elbow. And thanks to an incredible list of football injuries from his high school and college days, it may only be a matter of time before osteoarthritis creeps into his knees, ankles, and neck. “Someday I may need a cane,” he says incredulously.

People in Banks’ generation are putting a new face on arthritis. According to a report from the National Institutes of Health, aging baby boomers are at the center of a growing epidemic. According to the Centers for Disease Control and Prevention, 54 million Americans have arthritis — and by 2030 that number is expected to jump to 67 million. If Banks ever does need a cane, he’ll be in good company.

Such numbers should sound a warning to boomers everywhere. Arthritis or no, now is the time to start taking care of their joints. Webb, for one, plans to trim down his football-player physique, a step that would take some of the strain off his knees, hips, and ankles.

Most of all, he intends to keep moving — without overdoing it. Whether it’s a long walk with the dogs or a bike ride with his girls, regular exercise will keep his joints flexible for as long as possible. As muscles become stronger and tendons more limber, the pain and stiffness start to fade.

For patients with osteoarthritis, there’s another important benefit of exercise. Simply put, regular activity provides lifeblood to the cartilage that cushions joints. Unlike most tissues in the body, cartilage doesn’t receive nutrients from the bloodstream. Instead, it gets nourishment from fluid (called synovial fluid) in the joints. When a joint moves, the fluid sloshes around, giving the cartilage a healthy dose of oxygen and other vital substances. As an added bonus, regular exercise encourages the body to make more synovial fluid.

Like Banks, most baby boomers aren’t ready to take their advancing age lying down. Instead, they’re running and swimming and shooting jump shots. According to a recent report from the American Academy of Orthopaedic Surgeons, today’s boomers are much more active than previous generations. And that’s part of the problem.

While a sensible amount exercise offers powerful protection against arthritis, many baby boomers are getting too much of a good thing. Nicholas DiNubile, MD, an orthopedic surgeon and best-selling author, summed up the situation at a conference of the American Academy of Orthopaedic Surgeons. “Stiff joints, aching muscles — many of these ‘aging pains’ are actually due to overuse. Quite often we find that baby boomers have participated in a sports activity years ago as young adults and think they can resume the same activity in the 40s or 50s without any modifications.”

In short, baby boomers often ask too much of their joints. All of that running, jumping, and pounding can easily damage tendons, cartilage, or bone. According to a report in the Annals of Internal Medicine, such injuries often lead to arthritis years down the road. If a person already has arthritis, those sprains and tears and breaks will only add to the pain.

Even if you aren’t an athlete, your joints may suffer from normal wear and tear. According to the American Academy of Orthopaedic Surgeons, doctors perform more than 800,000 knee and hip replacements every year, and that number is expected to grow. Some of the new materials for artificial knees and hips can last longer than the old ones — about 25 to 30 years. The good news is that with joint replacement surgery, many people with severe arthritis can resume a full and active life.

A recent study warns, however, that knee replacement surgery should be reserved for very severe cases of arthritis. For milder cases, cartilage restoration may allow you to keep running and jumping, according to the MedStar Washington Hospital Center of Seattle. Says Medstar: “It’s like fixing a pothole on the knee.”

Remember, variety is a virtue. A fitness program that combines several different kinds of exercises — including aerobic activity and strength training — will help you keep your joints strong and flexible while reducing the risk of injury, especially from overuse.

Listen to your body. Your joints will let you know when you’ve gone too far.

In addition, it’s a good idea to keep your weight down. The extra pounds associated with middle age can strain the joints, especially in the knees and hips. Over time, this strain may lead to arthritis. The good news is that even a small reduction in your waistline can lead to a big reduction in your risk. A study published in the Annals of Internal Medicine found that women who lost an average of 11 pounds over 10 years cut their risk of osteoarthritis in the knee by half.

Charlie Banks isn’t willing to just wait for arthritis. He sees his physician regularly and is ready to do anything it takes to protect his joints. In the future, that very same doctor will likely have to help Banks manage pain and stiffness in his knees and ankles.

Despite the potential pain in his future, Banks says he doesn’t regret all of those football games in his past. “Sports taught me a lot about teamwork,” he says. Teamwork got him into this situation, and it will help get him out.

*Charlie Banks is a pseudonym.