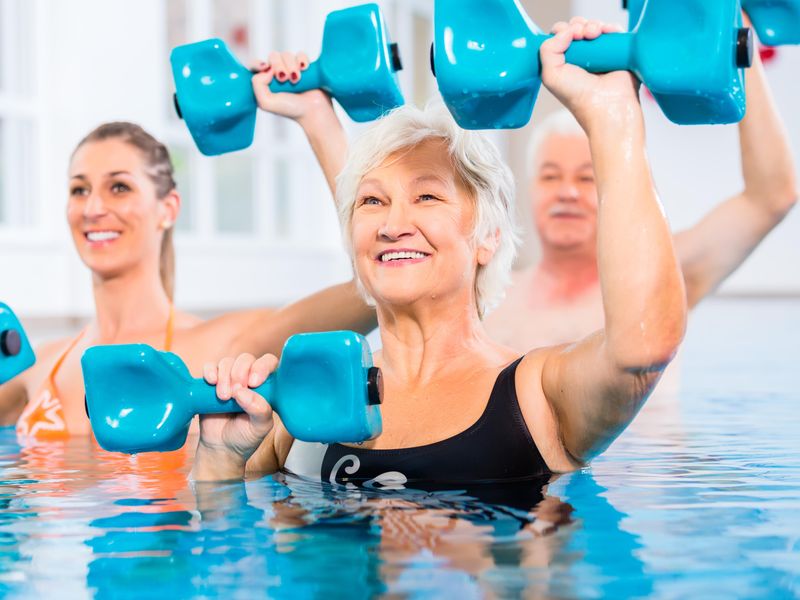 Twelve older women are sitting in a shallow swimming pool while the strains of Swan Lake rise in the background. An extended family of bright yellow rubber ducks bobs around the pool as Maria Antonietta Nevarez leads the group through a simulated bicycle exercise. “Okay, close your eyes: Where are we riding to today?” she asks the group. “We’re in Golden Gate Park — there are irises growing on the path,” comes the reply. Later she leads them in pressing their thumbs against each finger. “Now, let’s play the piano,” she calls, as she moves her fingers across an imaginary underwater keyboard and sings at an operatic pitch.

Nevarez was once a pupil in the class she now teaches, so debilitated by arthritis in her knees that she was barely able to walk the block and a half to her aquatic therapy class.

“I would have to take two or three steps and then stop, take a break and start again,” she recalls. “By the time I got to class, I was in awful pain and in tears,” says Nevarez, who has osteoarthritis. Hers is the most common type of joint disease, which strikes many of us as we age.

But once she stepped into the warm water, everything changed. “I’d be so happy in the water, because it was the only place I could move and not feel pain,” she says. The water exercise class also helped her heal quickly from subsequent surgeries for a hip replacement and two knee replacements. “I’m in the water two hours a day, five days a week,” says Nevarez. “You see me walk. I don’t limp and I’m pain-free.”

The class that Nevarez joined is part of a program known as AFAP — Arthritis Foundation Aquatic Program — and was developed by the Arthritis Foundation (AF) and the YMCA and offered by AF chapters around the country. People with all kinds of arthritis step into warm, shallow pools where they’re led through a series of exercises that are gentle enough to perform without strain. The combination of heat, water, and motion gives many people afflicted with joint disease a respite from chronic pain and stiffness. It makes them stronger and more agile and allows them to move without further damaging their joints.

Each class lasts 45 minutes to an hour. Like any good exercise routine, the program has a series of warm-up exercises to begin with and cooling-down movements at the end. Typically, the class starts with a small leg swing, the participants standing and leaning against the side of the pool for support, and finishes with toe curls and ankle circles. In between, practically every muscle group is put to work. Even if the routine sounds daunting at first, many people with arthritis are surprised at what they can do over time.

Isobel Jenkins* started aquatic therapy classes to help with her arthritis pain. “I couldn’t do all of the exercises right off, I had to build up tolerance,” recalls Jenkins, who is in her 70s and suffers from osteoarthritis, especially in her knees. “I’d say within a couple of weeks I could walk without pain in my knees — and it had been a long time [since I was able to walk without pain]”, says the former special education teacher.

The science of moving in water

Experts say that if people with arthritis spent more time in the water, they’d be able to move better with less pain. “In water, a person who has trouble moving on hard land with gravity and surfaces can move in ways they would never be able to do out of the water,” says Dr. Robert Gilbert, an orthopedic surgeon and clinical professor of orthopedic surgery at University of California San Francisco Medical Center.

In waist-deep water, you bear about 50 percent of your weight. Walk in chest deep and you’ve shaved away another 25 percent of your body weight, says San francisco Bay Area physical therapist Donna Everix. “You’re lighter in water, there’s less weight going through the joints, so it doesn’t hurt as much and you can tolerate more,” explains Everix.

Numerous small experiments suggest the benefits of water exercise. In a study published in the journal Arthritis Care Research, researchers compared the benefits of warm-water exercises to the advantages of sitting in warm water, exercise on land, and general relaxation techniques. The 139 patients studied, all suffering from rheumatoid arthritis, were randomly assigned to try one of the four techniques twice weekly for 30-minute sessions over the course of one month. All patients improved physically and emotionally, but those assigned to the hydrotherapy group “showed significantly greater improvement in joint tenderness.”

The Cochane Collaboration, which evaluates the basis for medical treatments, noted that “there is gold level evidence” that for osteoarthritis of the hip or knee, aquatic exercise probably reduces pain and improves function over three months, although they note that there is not enough data to
know how it affects the disease in the long run.

Proponents of aquatic therapy say one benefit — well-being — should not be overlooked.

Apart from making one feel lighter and experience less pain in the pool, aquatic therapy can buoy one’s spirits, they say. Nevarez became such an enthusiastic aquatic therapy student that the Arthritis Foundation recruited her to teach the class.

She knows well how difficult it can be even to make it to the class, so she uses her own brand of humor as encouragement. “I tell them, ‘Take your pain, put it under your arm and get your como se llama into the pool!'”

Where to find a class

If you’ve just had surgery, or are about to, your doctor may want you to work one-on-one with a physical therapist to build up basic strength, instead of taking a hydrotherapy class. Physical therapists may work with arthritis patients in warm water to help increase endurance, motion, and balance.

If your doctor gives you the green light to take an Arthritis Foundation aquatics class, bear in mind that aquatics therapy teachers are nothing like aerobics instructors, who push you to work harder. Certified aquatics instructors frequently remind classes that nobody should extend beyond his or her own comfort level.

Some people with arthritis find it difficult to get into and out of a bathing suit. Check with the program: It’s often acceptable to wear shorts and tops or other loose-fitting clothing. If you’re concerned about slipping in the pool, ask the Arthritis Foundation or the instructor about water slippers that provide traction while walking in water.

Whatever accommodations you make, if you join a water therapy class you are likely to see some results. One class member who had previously cloistered herself in her apartment because of severe arthritic pain and depression says the water gives her a sense of well-being, and so does being in the group. “I feel everyone’s supportive of each other because we’re all coming from the same place. It makes such a difference in one’s life.”

*Isobel Jenkins is a psyeudonym

Interview with Mary Ann Cerriotti, a participant in the aquatics program.

Interview with Donna Everix, physical therapist who has specialized in rheumatology and aquatics and is affiliated with Mills-Peninsula Health Services in Burlingame, California. “AFYAP: An Overview.” YMCA Aquatics Program, Arthritis Foundation.

“Aquatic Therapy for the Treatment of Hip and Knee Osteoarthritis,” Cochrane Collaborative Reviews.